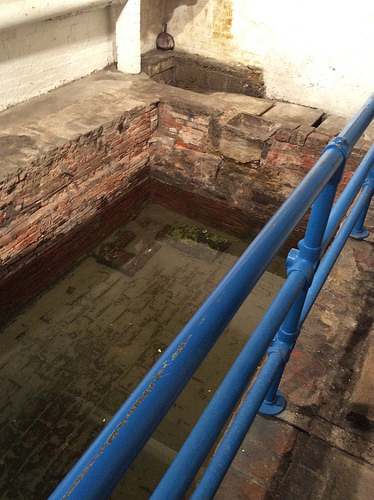 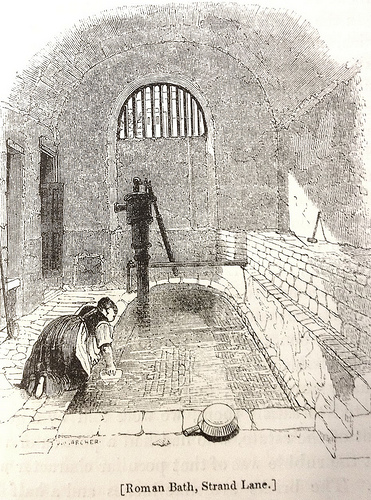 IN LONDON OLD AND NEW published in 1878 Walter Thornbury described the Roman Bath as one the “few real and genuine remains which date from the era of the Roman occupation of England”. Charles Dickens is believed to have taken a cold dip in one of the two fashionable baths and, if he didn’t, he certainly sent David Copperfield there for “many a cold plunge”.
William Newton observed, in his “London in the Olden Time”, that it is “without doubt a veritable Roman structure, as an inspection of its old walls will prove”. Thurlow Weed, in the 1840s reported that it was used now as it has been for centuries, for bathing, and, though situated in Strand Lane, not six rods from the Strand, “I do not believe its existence is known to one thousand of the three millions of people who inhabit London.”
That may still be true today even though London’s population has soared because the bath (above, left) – it’s not Roman at all, by the way – is an orphan among London monuments. It was bought by a reluctant National Trust in 1947 on condition that someone else put up the money (Montague Meyer, a timber tycoon) and someone else looked after day-to-day management, a task that today falls to the parks department of Westminster Council where it is probably not their highest priority and only open to the public on special occasions. It is rumoured that King’s College which owns surrounding properties wants to sell. I tried to get near it yesterday for a photograph but the approach was locked up like Fort Knox.

Things may now be changing thanks to the digital revolution. Kings College is collaborating with the National Trust to add virtual layers, including 3D modelling, on a computer which would integrate the present bath, including the second one currently hidden, with the memories, myths and inter-connections of the past which are necessary to understand its place in history. This would include the role of water in restoring bodily fluids and the social exclusion of being inside the walls of the adjacent Somerset House where water was plentiful with the situation outside where people were scampering for it. Interactivity between the bath and other things gives rise to the interesting thought that Six Degrees of Separation may apply as much to buildings as it does to people like Kevin Bacon. 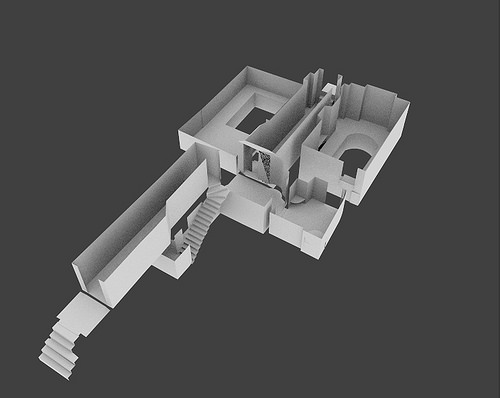 The 3D model, by Emma King of King’s College, enables you to see the second bath which can’t be seen even if you gain access to the first one which is occasionally open to public view.
Fascinating research by Professor Michael Trapp of King’s College and a colleague shows that, although it was a cold bath for many years with some of the bricks dating back to the 1550s, it was reconstructed as a cistern providing water for an elaborate 30 feet high Mount Parnassus (or maybe Mount Helicon), fountain built in 1612 by James 1 for his wife Queen Anne of Denmark at the eastern end of the grounds of Somerset House, now part of the King’s College campus. 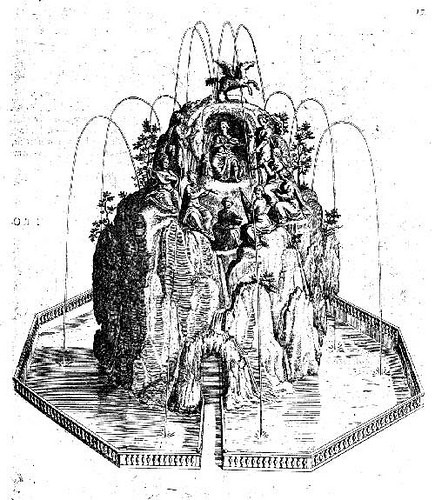 As the 1615 engraving shows it was on a grand scale with manifestations of the four great rivers of England, including the nearby Thames.
The National Trust is rather short of historic buildings in central London and its involvement in bringing digital techniques to augment the experiences of the “Roman Bath” project and Benjamin Franklin House near Trafalgar Square are an attempt to make up for this by using virtual techniques to conjure up the associations of the past.