The Tate and Lyle refinery at Silvertown

It started as one of my walks from Trafalgar Square without crossing a road. Taking up where I left off last time at the Millennium Dome I headed past Antony Gormley’s beautiful Quantum Cloud sculpture with its spasmodically visible man (himself) which provides an unintended counter point to the invisible people in the underused cable car ferrying passengers high above the Thames to the north bank.
Pausing only for a detour at the pretty Greenwich Peninsular Ecology Park I strolled along the reed-lined banks of the river to the Thames Barrier for a quick lunch in the cafe where the view is rather better than the food. Then to the Woolwich pedestrian tunnel under the Thames, which I have to admit I hadn’t even realised existed until embarrassingly recently. (We all have our manors . .) It is similar to the foot tunnel at Greenwich but a bit spookier to walk along when you are the only one. 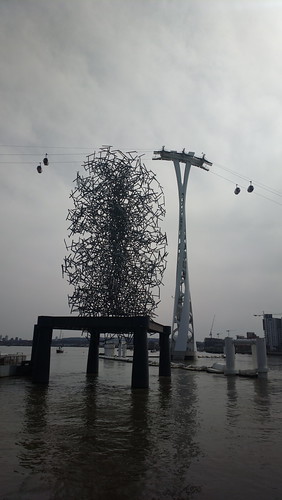 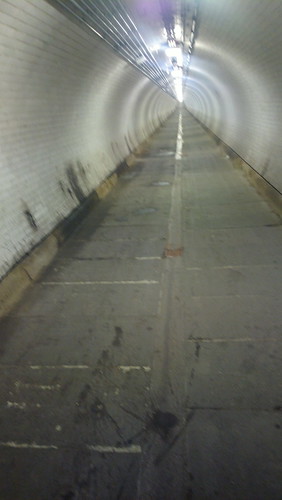 Sadly, the Thames path north of the river came to an abrupt halt shortly afterwards at the far end of Tate and Lyle’s dominating presence at Silvertown which is still one of the biggest sugar refineries in the world and one of the very few large industrial complexes left in London.
Seen from the other side of the river (above top) it has an almost majestic presence and a welcome antidote to the Stalinisation of the north bank upstream where miles of look-alike apartment blocks dominate the eyeline.
You can ‘t look at this building without thinking of the history it emerged from.  Henry Tate set up the (cane) sugar refinery while Abram Lyle established a rival golden syrup factory a mile upstream. The two rivals took the same train from London every day in separate carriages without speaking to each either. Indeed they never ever met – but after their deaths the two companies merged in 1921 to form Tate and Lyle.
Tate and Lyle sold its refining business to American Sugar Refinery in 2010 leaving it to concentrate on bulk ingredients, a shrewd move, maybe, now that the adverse health properties of sugar are being emphasised. Lyle’s Golden Syrup tin, which has remained almost the same since 1885, has been recognised by the Guinness Book of Records as Britain’s oldest brand.
The refining of sugar sits uncomfortably between its original links with the slave trade in the West Indies and modern perceptions that too much sugar is ruining our health. But the people – mainly women – who laboured there appear to have been an uncommonly happy workforce as is charmingly chronicled in a recent book The Sugar Girls (@The_Sugar_Girls). Sir Henry Tate, of course, is best known for his role in establishing the eponymous Tate Gallery. I wonder whether it would have been of the slightest interest to him to know that today you can walk from the Tate Gallery (the opposite side of the road admittedly) to Tate and Lyle’s  premises at Silvertown in the East End . . . without crossing a road.