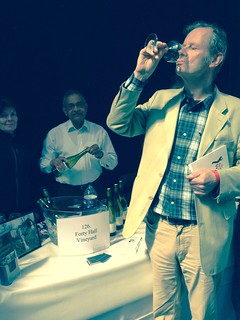 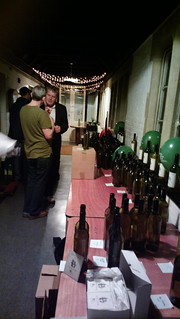 Me (left) sampling Forty Hall – Chateau Tooting (centre) – and Olding Manor, right
A highlight of my sojourn among English and Welsh vineyards last year was the almost biblical sight of volunteers toiling among the ten acres of grapes at Forty Hall (photo below) in Enfield, probably the biggest vineyard in London since the Middle Ages. Yesterday I had my first taste of the 2013 vintage  at the Real Wine Fair at Wapping. Davenports the highly regarded vineyard in Sussex which made wine from the Forty crop was also at the Fair. And the result?  Young but fruity and very palatable,  the best of the new London vintages I have tasted this year.
This was one of about 200 bottles of still white wine (the sparkling, which takes longer to mature, is yet to come) produced in this pioneering year which will mostly go to members of the community who have given their time or donations to bring to fruition a project that is the pacemaker in the sudden revival of winemaking in London. 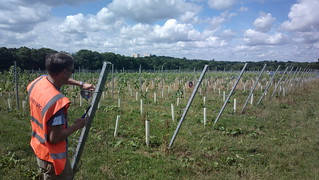 Forty Hall
But it is not yet the biggest despite Forty’s plans to expand eventually to 10,000 bottles. London’s current leading wine producer couldn’t be more different. It is Chateau Tooting, which I have written about before,  is producing nearly 700 bottles of wine – with ambitious plans for expansion – from anonymous grapes submitted by volunteers from their gardens and allotments. I was so surprised by the quality of the Tooting wine considering the changeling circumstances of its birth that I asked their winemaker, the multi-prize winning Bolney Estate in Sussex, what sort of alchemy they had employed.

Sam Linter, managing director of Bolney, commented: “When the grapes arrived we thought this is going to bean exciting challenge. All our experiences and skills were needed.” She said the batch was a mish-mash including ripe, overripe and under-ripe grapes. Among the techniques used to cope with this were to reduce acid at the pre-fermentation stage, put in a few light oak chips while fermenting and ensure a gentle pressing so unripe grapes not would not be squeezed so hard. How would she judge it in a blind tasting? She replied that it was the best Chateau Tooting yet and she had drunk an awful lot worse in supermarkets. It was, she said,  “easy to drink though with no real complexity, but is clean, fresh, with some fruit, a sound wine.” The lesson, it seems, is that you can make drinkable wine from poor grapes as long as you have the right techniques and equipment.  However, she emphasises that top quality wines still require the best quality  grapes! 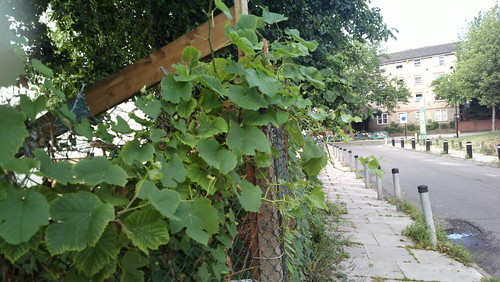 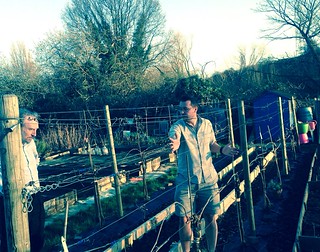 If Forty and Tooting are Premier Division, there is a growing number of smaller operations such as Paul Olding (above. right) who produces around 100 bottles of Olding Manor – very drinkable whites and reds – from his 42 vine allotment in Lewisham which he kindly gave me a tasting of. It is already proving contagious as eight out of 15 nearby allotments have taken his cuttings and he himself wants to buy land in Kent for a proper vineyard.

Alex Smith, founder of Alara Wholefoods and one of the pioneers of urban winemaking, has wrapped some vines around the perimeter fence of his works in Camley Street, King’s Cross (above, left) and has produced around 70 bottles this year. Tony Hibbert, who writes about his experiences as a small-scale grower in UKvine.com, hopes to produce 200 bottles a year eventually but this year his main crop was 24 bottles of red from his Pinot Noir vines which he is rather pleased with. Marko Bojcun has planted a vineyard called Hawkwood in Chingford to grow for the local community making wine for dozens of households who bring their grapes to him.
All these projects have one thing in common. Community. They are run by volunteers doing something for the common good which purely commercial considerations might rule out. Whether it will all wither away or, helped by global warming, grow to become a national phenomenon remains to be seen.
Of course, the price of land in London rules it out as a source of major vineyards but you only need to take a train journey to see an abundance of wasted land either side of the tracks which, with suitably secure fences,  could be put down to grapes as could gardens and allotments up and down the country.
The quality of the wine could easily be improved by coordinating the efforts of volunteers to plant one particular variety which grows well in England and Wales – say Bacchus or Seyval – and exchanging regular advice on best practice. London used to have lots of vineyards including at Westminster, Piccadilly, St Giles, Holborn, Lambeth and Bermondsey. Now there is a revival, thanks at least in part to global warming.
Follow me on @BritishWino or @vickeegan or sign up to receive updates in the slot on the top right of the screen