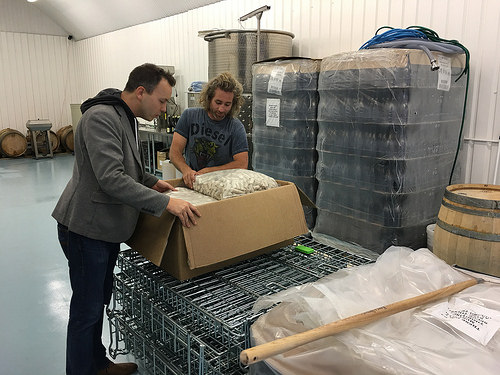 IF YOU care to walk along a down-at-heel alleyway cluttered with second hand furniture barely 30 seconds from Bethnal Green Tube station in East London you will stumble across a spanking new space under a Network Rail arch. Welcome, Renegade London Wine, the latest in what is beginning to look like a mini boom of wine makers in London. Forget craft beer, artisan wine is the new red. London Cru started it in 2013 in a winery close to West Brompton underground station and is still going strong. Now three others are joining the fray. Vagabond Wines which serves wine by the glass (with a choice of 140 varieties in its newly opened Victoria branch) will soon launch a new winery in the Nine Elms complex by Battersea Power Station complete with visitor centre. Meanwhile Sergio Verrillo, an American from Connecticut is opening yet another one in the Queenstown, Battersea area later this year in time for the harvest. All of them will be processing at least some UK wines.
Making wine in capital cities where rents are often sky high is not quite so barmy as it sounds. There are reckoned to be over 300 urban wineries around the world including successful ones in New York with sampling and eating facilities attached.
Warwick Smith, who runs Renegade with the winemaker, Josh Hammond is hoping to attract cult customers if all goes well by offering wine by the glass and possibly snacks in the winery itself as well as seeking online sales and getting into restaurants. An ex City asset manager he gave me a sample of several of this year’s newly labelled wines yesterday including Bacchus (fast becoming the flagship English still wine) Sauvignon Blanc from France and Pinot Noir from Italy. I was impressed. They have made 7,500 bottles this year from English grapes from Suffolk and Herefordshire plus fruit from France and Italy. Bizarrely – like London Cru – they are not allowed to call their Chardonnay “Chardonnay” even though it is from a well respected Italian vineyard because of arcane EU rules about certification. They know they will have to sell a lot more that 7,500 to turn a profit but they seem very focussed to do that. They are also believed to be making a batch of sparkling wine from English grapes but they are a bit coy on the subject. As I was leaving Josh showed me a few Chardonnay cuttings which he is about to plant in a wooden container to catch the afternoon sun outside. Maybe one day they will make a little wine from their own grapes. You can follow them on (hash)renegadelondonwine or instagram. 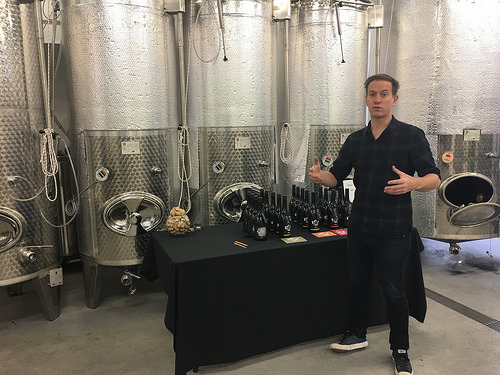 London Cru, which pioneered the idea of an urban vineyard in London in 2013, produced an impressive 24,000 bottles of English and Continental wines last year of which about 60 per cent goes to the trade (mainly restaurants) and the rest directly to consumers especially at tasting events in the winery. It has built up a good reputation for quality and counts French sommeliers amongst its customers. Winemaker Gavin Monery reckons that London could support lots more urban wineries – probably with a restaurant or café attached as Vagabond is doing at Nine Elms – but he admits high rents are a problem. Both London Cru and Renegade admit they will have to sell a lot more to achieve long term viability. Gavin says the “magic number” is 50,000.
These are the first commercial wineries in London for a very long time though exactly how long is hard to nail down. The antiquarian Thomas Pennant (1726 to 1798) observed that “The genial banks of the Thames opposite to our capital (ie in Lambeth) yield almost every species of white wine; and by a wondrous magic, Messrs. Beaufoy here pour forth the materials for the rich Frontiniac, destined to the more elegant tables, the Madeira, the Caleavella, and the Lisbon, into every part of the kingdom. . . . The foreign wines are most admirably mimicked.” It was reported that five sixths of the white wines consumed in the capital were the produce of home wine presses.
If Renegade does produce a sparkling wine then it will open a fascinating discussion about which sparkling wine is more truly “London” – that of Forty Hall (grapes grown within the London postal area but processed in Sussex) or that of Renegade (grown in the country but processed in London). Let the debate roll on.
(This blog is replicated on my English and Welsh wine blog victorkeegan.com)
Tweet
englishLondon CruQueenstownRenegade WinesVagabond wineswinerieswinery
0
TwitterEmail