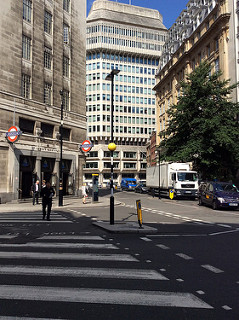 .
.
.
.
.
.
.
.
.
.
.
.
.
.
.
WITH SO MUCH controversy about the exploding height of buildings it is pertinent to remind ourselves of the one that started it all – Queen Anne’s Mansions opposite St James’ Park station, the first high-rise flats in London. In those days we didn’t build big. For centuries the tallest secular building in London was the Fishmongers’ Hall which is now a dwarf among the buildings around it. In the late 1880s, Henry Hankey, a dodgy City banker, erected Queen Anne’s mansions, an unprecedented – wait for it – 13 stories high, more than twice as high as normal flats of the time – without bothering with the tiresome task of asking permission. This may not seem large to us as developers line the whole of one side of Victoria Street with 20-storey plus monsters but it was hugely controversial then. The Metropolitan Fire Service warned that its hoses could not reach the top of the building in the event of fire. The Builder magazine described it as “monster blocks of dwellings” and the Times as “the most elevated thing in bricks and mortar since the Tower of Babel”
When Hankey started to expand the building along Petty France, the architect of the Grosvenor Hotel (by Victoria Station) James Knowles – who admittedly lived next door to the mansions – wrote to the Metropolitan Board of Works saying that the mansions, already a bye word for their monstrous and overgrown ugliness would “constitute an eyesore so offensive as would disgrace the whole neighbourhood of Westminster . . And turn this quarter of London into a laughing stock”. Goodness knows what Mr Knowles would make of the current redevelopment of Victoria Street. He would be lost for words. (The quotations above are taken from Richard Dennis’ excellent paper on the mansions)
Eventually, the London County Council gave up its attempts to prove that construction of the building was illegal by making sure that it would never happen again. In an Act of 1890 the maximum height of new buildings was to be 90 feet – later reduced to 80 feet in the 1894 Act.
Queen Anne’s Mansions continued to be a paradigm of ugliness in the early 20th century. A drawing of “one of the most inexcusable buildings in modern London” (see above) was included in 1905 in Henry James’s English Hours. Of course, one solution was to live in the mansions so you could get its wonderful views without having to look at the building itself, a solution adopted by many people including MPs who railed against it in Parliament.The mansion block lasted until the 1970s when it was pulled down and replaced by a much bigger and if not uglier, then certainly more brutalist building, the new Home Office, designed by Sir Basil Spence (above, left). Whether, in the long term, the mansion block was a hero or villain depends on your point of view. It was almost universally reviled but the reaction to it kept London’s skyline much lower than would otherwise have been the case. Well, until recently.