CYCLING gets enormous publicity in London. Walking is hardly mentioned at all yet London is arguably the most walkable capital city in the world as I have discovered doing my – only slightly barmy – walks from the centre of Trafalgar Square without crossing a road. Among destinations so far I have got as far as Islington, and the Millennium Dome accompanied by witnesses and the Lea Valley (without witnesses). But the most ambitious – Trafalgar Square to Margate – is still a work in progress.
It is in theory 9/10ths complete but the final tenth is the most difficult bit and as it is possible I may not complete the journey it might be wise to give a progress report. Knowing that the dual estuaries of the Medway and the Swale were the likely sticking points I did the walk in a pincer movement, walking from London to Margate and from Margate to London hoping to meet myself in the middle.
It has been an exhilarating experience opening up vistas of my own country hidden from past experience. From the London end I hugged the romantic remoteness of the Thames estuary past Greenhithe, Gravesend along the Dickensian coast ending with a desolate walk of miles and miles to All Hallows without passing or being passed by a single soul. All Hallows, a village on the Hoo peninsular in remote Kent was once planned to be the biggest coastal resort in Europe outstripping Blackpool. It never happened.
From the Margate end I started from the bus shelter overlooking the sea where T S Eliot wrote much of The Waste Land through some lovely resorts like Herne Bay and wonderful shell-soaked Whitstable that I inexcusably hadn’t visited before thanks to a myopic preoccupation with France for holidays. I managed to circumnavigate the Swale Estuary but as the marshland of the Medway loomed optimism began to fade. I stopped a few days ago at Upchurch having taken about 12 miles to walk a distance of a few miles as the crow flies from near Swale station. It looked as though I would have to cross a road so next time I will have to retrace my steps and find another way. When you look at the map above it doesn’t look far to bridge the gap between All Hallows and Upchurch as the crow flies but I walk not fly like a crow. Succeed or fail, it has been an unforgettable experience which I hope to come back to at greater length.
Thames estuary near Tyneham 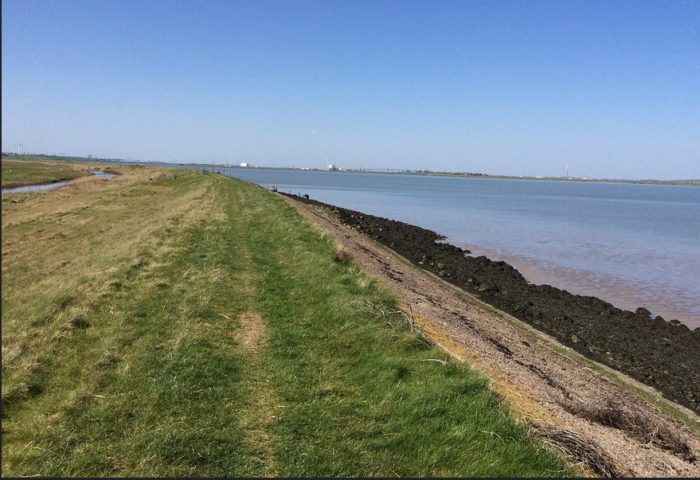