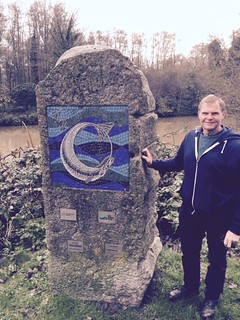 A chunk of the 1830s London Bridge on the River Lee 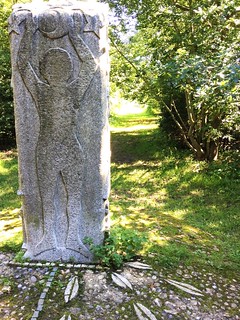 Sculpted stone from the Bridge on the Meridian Line

MOST PEOPLE have a vague idea that the old London Bridge was sold to the Americans in the 1960s. Except that it wasn’t. At least not all of it. The Americans built a reinforced concrete structure for the bridge and only wanted the stone as cladding which means that an awful lot of it was left in London. But where?For some years I have been collecting information about where the old stones of the demolished 1830s bridge – and the earlier mediaeval one – have survived. When the list reached nearly 30, ranging from a suburban wall in Wandsworth to a public space at Amersfoort in Holland. I thought that must be it. But then I came across Bryan Hewitt, author and gardener at Myddelton house in Enfield which itself is home to bits of the mediaeval bridge. He told me that in the early 1970s a load of huge granite blocks was deposited by persons unknown on a roundabout on the A10 at Hoddesdon in Hertfordshire. I would guess that they  came directly or indirectly from the yard of John Mowlem and Company who demolished the old 1830s London Bridge in the early 1960s when most of it went to Arizona (as chronicled by Travis Elborough in London Bridge in America). According to a letter in the Kew Gardens archives, there were 400 tons of blocks left over in the yard – ranging up to 6′ 3″ high weighing 3 tons.They are now spread around the Lee Valley Country Park and Bryan kindly took me on a walk last week to see some of them. One of the most iconic is a very large block along the Walton Way section of the River Lee which has a circular mosaic of a fish (picture, above) embossed on it in memory of Izaac Walton, author of the 1653 Classic The Compleat Angler who used to fish along this stretch. The temptation to turn  remnants of London Bridge into artworks is also evident in  the two sculptured blocks standing sentinel a mile apart on a lane marking the meridian line stretching from Waltham Cross to the Crooked Mile road (above, right).

Outside St Margaret’s Church in Barking (left) two smaller stones have been joined together in a minimalist sculpture. The stone in the most public view stands between the Odeon cinema and the Lee Valley Athletics Centre at Meridian Way, Edmonton (below, left). This stone is dedicated to the Duke of Edinburgh as is a much small one near the toilets at Fishers Green.  There are two other similar stones on the other side of the canal to the Lee Valley White Water Centre at Waltham Cross which almost certainly came from the same mysterious drop at the Haddesdon roundabout. I am amazed at the fresh discoveries of bits of the various versions of old London Bridge. If anyone has heard reports of other remnants, I’d be delighted to hear them. 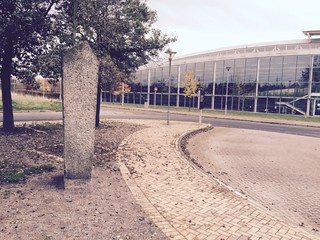 Outside the Athletics Centre, Edmonton