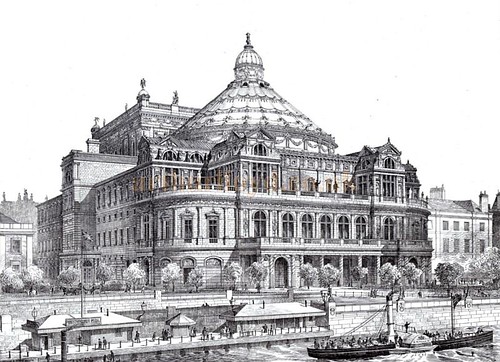 WHEN YOU look at the Norman Shaw building on the Embankment next to Westminster Tube station (below, left) it is difficult to envisage it as the grandest opera house in Europe. It used to be Scotland Yard, the headquarters of the Metropolitan Police and is now used to provide offices for MPs. But in the early 1870s James Mapleson, a well-known impressario, not only planned to build a  Grand National Opera House on this site but actually built nearly all of it. With a frontage of 160 feet  (see, above) it was planned to have been bigger and grander than La Scala in Milan, complete with an underground passageway to the Houses of Parliament – which is still there – so MPs and peers could abscond from the Opera if there was a division bell. It would have been completed had Mr Mapleson not run out of money before he reached the roof.
Strenuous efforts to raise the final amount failed and the uncompleted building lay desolate for years afterwards prompting this comment from the Liverpool Mercury in June 1884: “For years this melancholy pile which even in its incomplete state represented five million bricks and tons upon  tons of iron girders has been an eyesore whether seen from Parliament Street or the Embankment, forming, in fact a striking monument to grandly conceived but unfilled intentions”. 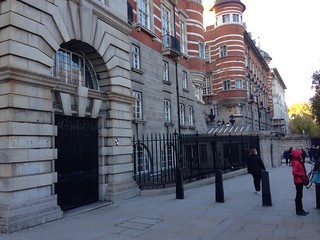 The bulk of the building was later demolished but not the solid foundations which went down to a depth of 50 ft – deeper than the adjoining District Line. They are still there. Mapleson’s son in a letter to Sunday Times in July, 1910 lamented that rooms built for opera singers had been converted into cells for prisoners.
I was refused permission to go and look for myself (Elf and safety, terrorism etc) but was kindly given this map of the basement which shows rooms that presumably were once intended for opera stars and  the subway (bottom right) to Parliament.

During the original excavations it was discovered that the foundations rested on the bed of the creek that surrounded Thorney Island, the land between the confluence of the Tyburn river with the Thames, on which Westminster Abbey, Westminster School and the Houses of Parliament were built. London is not short of buried history but the opera-house-that-wasn’t is one of the most buried.
Another fascinating fact is that parliamentary documents indicate that the east bound platform of the District Line at Westminster Station had an entrance – now disused – (photo, left) to enable the police to move men from Scotland Yard without having to go into the streets. This was (is) almost certainly part of the subterranean passages of the opera house that was never built because they couldn’t find the money for the roof. Somehow that seems to serve as a metaphor for the economic situation today.
Tweet
Embankmentgrand nationalla scalamaplesonoperaScotland YardtubeWestminster
0
TwitterEmail

The curious voyage of Cleopatra’s Needle