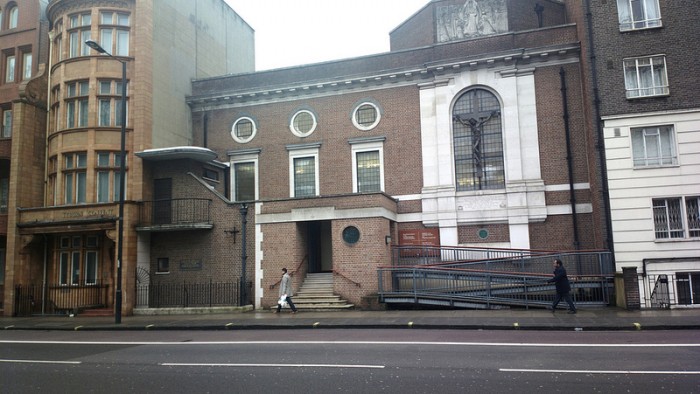 After the fatigue of walking from Trafalgar Square to Islington without crossing  a road what better contrast than to seek the solace of central London’s only enclosed monastery. The plaque on the outside  of the building at Marble Arch a couple of hundred yards from the station says Tyburn Convent but we were left in no doubt once inside that this was a real monastery (from the Greek “mono” meaning alone or only) dedicated to praying to God. Even for a non-believer there is a sense of awe as you enter the chapel – which is open to the public – and see Benedictine nuns, cut off from the world,  praying at the altar behind what looked like a wrought iron screen, no-one in the congregation daring to speak. There was an almost celestial quietness about it punctuated by what seemed like an ethereal hum but which turned out to be the Central  Line running underneath. The 20 or so nuns, it appears, have long since got used to this background noise and no longer hear it.
The monastery was built to honour the 350 Catholic Martyrs, including John Fisher and Sir Thomas More, who died for their faith during the Reformation under Henry V111 and Elizabeth 1. They were among up to 100,000 victims and criminals executed at the various scaffolds sround Tyburn many of whose bodies still lie beneath the ground, quite possibly under the monastery itself.
In another chapel – visitable by appointment – the walls are decorated with paintings and relics of the martyrs (see, below) including part of the bloodstained shirt in which William Howard, Viscount Stafford, was killed.
The nuns, though not as strict as Trappists, remain silent for most of the day and have to get written permission if they want to leave the building, say,  to vote or see someone in hospital. Part of one is curious about people spending their entire lives worshipping something that may not exist. But another part wonders if it matters if they achieve a peace of mind that many living outside could never achieve. 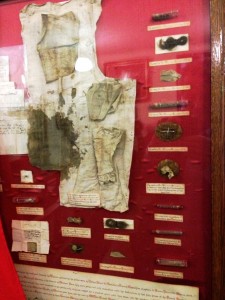 The London Bridge that went to America (well, some of it . .)