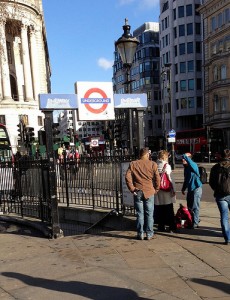 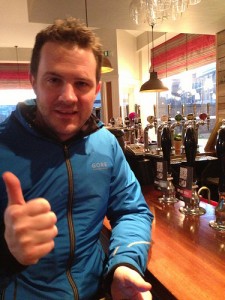 It was 5 55pm yesterday and seldom has a glass of red wine been so sweetly devoured. We had arrived at the Narrow Boat pub after a long-planned walk from Trafalgar Square to Islington – er, without crossing a single road, a journey that took almost five hours including a stop for lunch.
The key is to go south not north. With son Dan (above) as a – hmm –  independent auditor  and in bazing sunlight we headed down the subway from the middle of Trafalgar Square at 1.10pm. Emerging at the northern side of the Strand we then went down into another subway taking us into Charing Cross Station and then to the south bank of the Thames across Hungerford Bridge.
The rest is easy. Go to Tower Bridge crossing to the north bank, turn right down the stairs and keep hugging the pavements passed St Katherine Dock to Limehouse Reach where you turn left into the Regent’s Canal and proceed to Islington. Job done.
Except for one thing. The dodgy bit  is Limehouse Reach where there is a road with a swing bridge separating the Thames Path walker from the Regent’s Canal. I couldn’t figure out how to get around this until a previous walk with @aleksk and @moongolfer revealed it was possible to crawl under the bridge. Thanks, Tim. This is definitely not recommended for anyone else but sometimes  a man’s gotta do . . .
As a seasoned London streetwalker, this is the fourth journey I have done from Trafalgar Square without crossing a road. The first was to the Lea Valley (over 15 miles), the second via the south bank to Deptford  (where you enter a loop and can go no farther) and the third to the Millennium Dome (north bank to Greenwich then through the tunnel). The hero of all this is of course, London itself. It is amazing, given the haphazard way London has evolved, that it is possible to do such things at all. In what other major capital is it possible to contemplate such journeys? “London, thou art the flower of cities all!” (William Dunbar, 16th century).

To read about the onward journey to Margate https://bit.ly/2BGfVAF