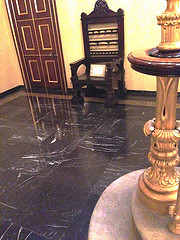 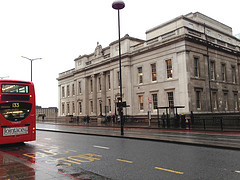 The two great survivors of modernity in the City of London are the churches and the opulent halls of the livery companies. Although many were rebuilt after the ravages of the Great Fire in 1666 they are mostly still standing today resisting the changes going on around them. Since it is much easier to enter a church than a livery company I jumped at the opportunity to join a visit to the Fishmongers’ Hall with the rather wonderful Thorney Island Society, Thorney Island being the bit of land on which Westminster Abbey was built.
The Worshipful Company Company of Fishmongers has been active for well over 700 years mainly because for a long time it had a monopoly of fish sales in London. Even today, unlike many other livery companies that have morphed into social and charitable institutions, the Fishmongers still monitor the quality of fish at Billingsgate.
There are lots of interesting artefacts inside not least the most famous portrait of the Queen by Annigoni which, surprisingly looking back on it, was controversial when it was painted in the 1950s, at least with the critics, being thought too retro. The Fishmongers commissioned the painting but inadvisedly sold the image rights to the Annigoni estate so that when films are shot in the Hall the makers have to pay a sizeable chunk to the estate if they want the painting in the background. I won’t reproduce the picture here for that reason but there are plenty of links on the internet like this one which give passable reproductions. In the background on the left is a tiny figure in a boat meant to be Annigoni who, like Hitchcock, enjoyed appearing in his own productions. He also did a similar portrait of a slightly scowling Duke of Edinburgh which is kept in  smaller room. Wonder why.
On the stairway there is a wonderfully detailed statue carved from elm of Sir William Walworth, a grandee of the  Company, raising his dagger to kill Wat Tyler at Smithfield during the Peasants’ Revolt of 1381. Until recently it was thought to be the actual dagger used by Sir William but it turns out it is of a more recent origin.
There is plenty of silver around and also a marvellous relic of the medieval London Bridge in the form of a large armchair hewn out of wood from the bridge. The slats across are carved in the shape of the old bridges. Thus is preserved a long link with London Bridge which separates the Fishmongers’ Hall from the old Billingsgate market where it ploughed its trade.
The original building was one of the first to be burned down in the Great Fire of 1666. The present Greek revival version was done by a little known architect Henry Roberts but he was under the supervision of Sir Robert Smirke, who designed the British Museum, and one of Roberts’ helpers was George Gilbert Scott. The Fishmongers’ Hall claims to have been the tallest building in the City until Queen Adelaide House (to the right of the lit-up Fishmongers’ Hall, below) was built across the road and others followed – with a vengeance.