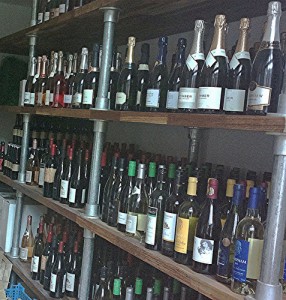 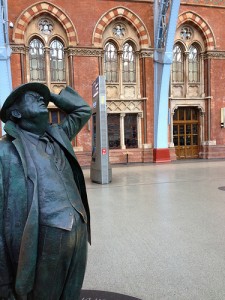 John Betjeman, the poet of all things English and the saviour of St Pancras station, would have been over the moon to know that a shop selling English – and Welsh – wines is about to open a few yards from his statue(above, right)  on the St Pancras Grand Concourse. The Wine Pantry, which has made a name for itself by selling indigenous wines from a tiny shop in Borough market is opening a new shop and bar there. Hurrah. You can see the building in the background and get a quick squint at some of the wines from a photo (above, left) taken through the window. I am dying to see how returning French visitors will view it. Will British wines become a must-have present to take back? Time will tell.
The opening is well timed. British wines are on a roll despite this year’s bad harvest. If I had been writing this a few weeks ago I would have said “English wines” as Wales was not thought to be seriously in the frame. But the award to Ancre Estate of Monmouth for the best sparkling wine in the world at a prestigious international blind tasting in Verona a few weeks ago has changed all that. British wines now regularly win international prizes but our restaurants and shops have been slow to follow it through. There are an estimated 120 sparkling wines in Britain but when did you last see one in a restaurant?
In the Middle Ages southern parts of the country were awash with vineyards until a combination of royal marriages (bringing with them French vineyards), climate change and the Black Death heralded a decline. Now there is a revival and even French champagne houses are said to be snapping up suitable land on the Cretaceous Chalk limestone hills of the North Downs, a rock formation shared with the Champagne area of France. Just in case. . .
In Medieval times vineyards were also common in London including Whitehall, Piccadilly, Pimlico, Clerkenwell and most places with names like Vine Street or Vineyard Hill. When Sir Christopher Hatton, Queen Elizabeth 1”s favourite was given Ely Palace  in Holborn it came with seven acres of vines. Until quite recently Messrs Beaufoy actually manufactured white wines (and vinegar) on what we know today as the Southbank of the Thames. Let’s hope the Wine Pantry marks a milestone in the revival of British, if not London wines.