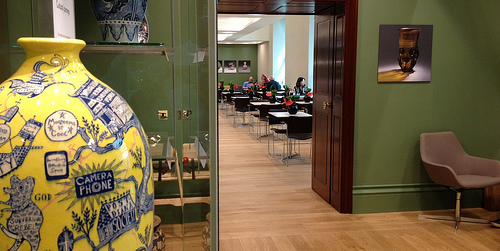 One of the delights of a London gallery is the Friends’ Room where you can relax, eat or work (wifi permitting). Until now Tate Modern has been streets ahead of the pack with its marvellous position looking across to St Paul’s and with entry to the other Tates at Millbank, Liverpool and St Ives thrown in. But the opening this week of a stunning new Friends’ Room at the British Museum on two floors has started what may be a Friends War as museums and galleries compete to attract fee paying members to broaden their appeal and raise money. The new BM room has a foyer enriched by a huge Grayson Perry vase (above) leading to a cafe with appealing food from Benugo. Upstairs (below) there is a long comfortable  lounge area with armchairs. The only worry is that supply will create its own demand and it will get full too soon.

Both Tate Britain and the Royal Academy are also  in the midst of radical upgrades to their Friends Rooms both of which had become far too small for burgeoning membership. Part of Tate Britain’s £45m upgrade includes a much bigger space for its members compared with the postage stamp sized room they have at present. Both the Royal Academy and the Tate have around 100,000 friends – big money when annual membership can cost up to £100  a throw.
The hero is the Royal Academy which is entirely privately funded yet manages to compete effectively with the publicly funded Tate from personal and corporate subscriptions.
My favourite? The Tate is still the most attractive at £67 for single membership  or £97 for double (less if you choose direct debit) with free entry to exhibitions and 10% discount on books which gives you access to all Tates. Compared with joining one of the stuffy clubs in Pall  Mall it is no contest for me. But in terms of strict financial value for money it is difficult to beat the RA  because otherwise you would have to pay every time you went in. If you go often you soon get your money back.  Galleries like National Portrait don’t have the space for a decent Friends’ Room so subscriptions are cheaper (£45 individual or £65 with guest pass) and you get 10% off meals in their splendid roof level restaurant.
Obviously, the more intensively you use them the better value they become but if you only go once or twice a year it is a waste of money. As a gallery junkie who works nomadically in public places  I have joined most of them and it is paying off now that Tate Britain, Tate Modern and the British Museum have  wi-fi. (Think cheap office space). But I have a feeling that I will have to get up earlier in future if I want to be sure of a seat.

Damien does the Lambeth walk