There are few places in central London that are more unrecognisable from their past than this little trodden backwater of Lambeth, a stone’s throw from St Thomas’s Hospital and Westminster Bridge. It is no exaggeration to say that this unpreposessing street, Upper Marsh gave birth to the  craze for music halls  which swept Britain and paved the way for today’s stand-up comics.
In 1849 Charles Morton opened the Canterbury Hall (above, left) in an area full of gin palaces, ragged children and inebriated blokes. It started off in the back room of a pub to be replaced by a larger music hall in 1854 able to take 1,500 people in which Charlie Chaplain’s father, amongst numerous others performed and Blondin did a tight-rope act.  By this time it had a large entrance in Westminster Bridge Road. It also exhibited paintings and was dubbed “The Royal Academy Over the Water”. Today it is remembered only by the name of the estate that occupies the site, Canterbury House (above, right).
Next door to the  Canterbury  was another embryonic music hall, the Bower and only a few hundred yards away (see map) on the site of what is now the Florence Nightingale Museum at the end of St Thomas’s Hospital was Astley’s, the world’s first modern circus with a circle of 42 feet for the ring (dimensions that are still standard today). Yet these three great precursors of modern entertainment,  though well known to theatre historians,  can’t boast a singe plaque between them. It is as if they have been rubbed out of history. The map (below) shows the Canterbury and Bower at the bottom right and Astley’s Circus top left. The road in yellow is Westminster Bridge Road. 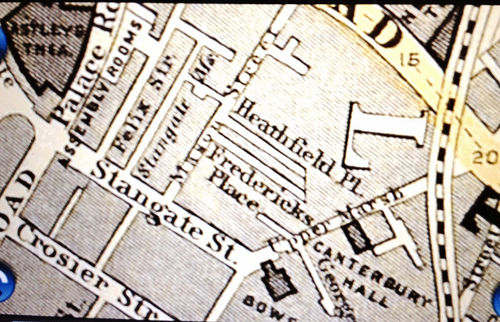