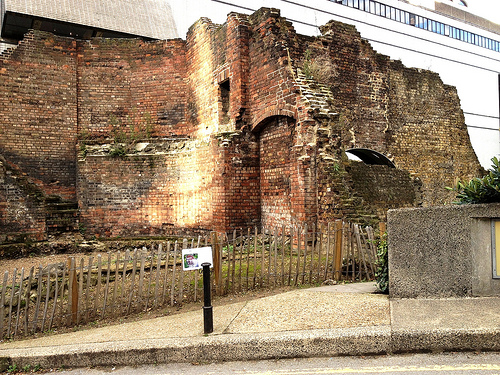 AMONG the nooks and crannies of the City  this has to be a favourite, not least because I worked for several years  in the same street – London Wall – without knowing of its existence. Seen  purely as a hidden oasis of greenery among the concrete office blocks of London Wall it is well worthy of note. If you follow through the various garden areas you come to a small lake and around the corner from it a secluded bower where, if you awoke from a long sleep you wouldn’t know which country you were in let alone which town. But it is the surroundings that make it rather magical. This is all that remains of a Roman fort that ran along the western side of the wall that Imperial Rome built to protect its capital city. You can still see the remains of the fort and the wall (above) which extends under the adjacent car park and along Noble Street on the other side of the modern road, London Wall. The original Roman wall was constructed in a near semi-circle from Blackfriars to the Tower of London. There are walks to show you the remains of the wall that have survived. 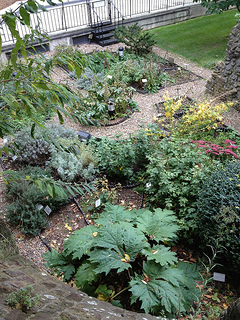 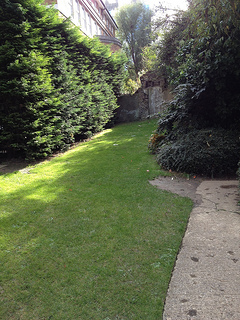 On the right side as you walk down is a herb garden (above) in memory of John Gerard whose famous “Herball” is still used today. Gerard was Master of the Barber Surgeon’s Company and planted what may have been the first herb garden here in 1597. Barber surgeons were so called because barbers performed surgery in those days. The Barber Surgeon’s Hall looms behind the herb garden and behind that is the church of St Giles, Cripplegate where the poet John Milton is buried. This patch of London is not short of history. 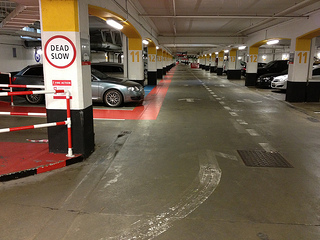 But another big claim to fame of this patch of land is invisible. It was host to its most famous resident, William Shakespeare who lodged at a house at the corner of Silver Street (now London Wall) and Monkwell Street. It has long been demolished and there isn’t even a plaque to commemorate the occasion even though it is the only house we know for certain he lived in. It was sited to the left along the underground car park (see left).