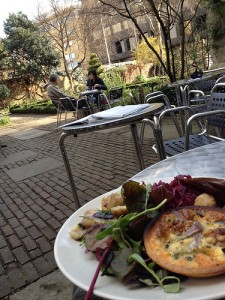 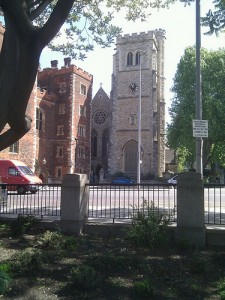 NO-ONE was more surprised at being voted the sixth best museum restaurant in the world by Gourmet magazine than staff at this lovely gaff nestling in the corner of St Mary’s church next door to Lambeth Palace. Most of the deconsecrated church is now home to the Garden Museum, claimed to be the world’s first, but in the far corner is an eclectic restaurant which in fine weather spills out onto a medieval-style knot garden with herbs, including a rosemary tree and an embryonic banana – watched over by the tombs of William Bligh (of Mutiny on the Bounty) and theTradescant family who transformed gardening in this country not least by importing the plane tree.  Bligh’s tomb is actually made of artificial Coade stone made in a (now defunct) factory by Hungerford bridge.
You can see why the correspondent of Gourmet magazine was smitten enough by this little gem to place it sixth in a list that includes the Hermitage Restaurant, St Petersberg at number one and the Musée d’Orsay Restaurant, Paris in the fourth slot.
The tiny kitchen of the restaurant serves up delicious vegetarian food, often with herbs from the garden which comes close to convincing non-veggies like me that maybe I should make the big step.
It would need a book to do justice to the history of this church. Here lie buried not only six and a bit – don’t ask – archbishops of Canterbury but dignitaries ranging from the grandfather of two of Henry V111’s wives to Elias Ashmole, founder of the Ashmolean museum at Oxford not to mention the last Viking king of England, Hardicanute,  who died at or near the church while drinking at a wedding.
Whether this tiny cafe, run on a shoestring,  will be able to cope with its new-found fame remains to be seen. I have already found it full up when going for one of my regular lunches. Fortunately, there is another as yet undiscovered vegetarian restaurant also in a historic setting close by in Lambeth which I had better keep quiet about though it is one of our Gems of London in the iPhone app of that name priced at 69p (see buy button on the right of this screen).
Tweet
0
TwitterEmail