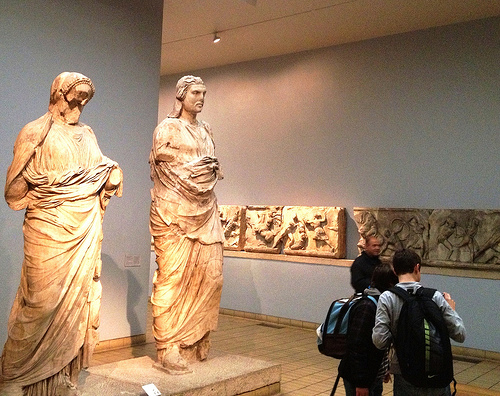 King King Mausolus and his Queen 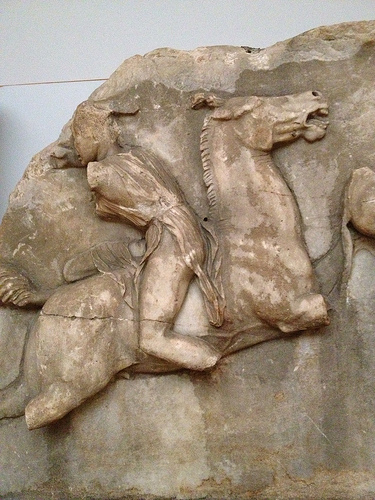 For most of my life – until last week – I had been under the impression that the only sizeable remains of the Seven Wonders of the World were the pyramids of Giza in Egypt. It turns out that all the time there were more and right under my nose in a place I have visited countless times: the British Museum. There in a room dedicated to the Mausoleum of Halicarnassus (at Bodrum in Turkey) where there are large dauntingly impressive, statues and many sections of the frieze showing the battle between the Greeks and the Amazons. The Mausoleum, which became the generic name for large tombs, was built for King Mausolus, ruler of Caria, by his doting queen and stood for nearly 17 centuries, surviving occupation by Alexander the Great in 334 BC before being destroyed by an earthquake.
Some of the stones can still be detected in the nearby castle of Bodrum, which was built by the Knights of Malta, or in what remains of the foundations on the original site (below, right). Other stones were taken to Malta in 1857 to Form part of a dock for the Royal Navy. 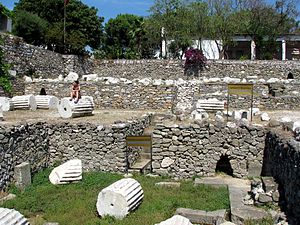 The remains at Halicarnassus (Bodrum) 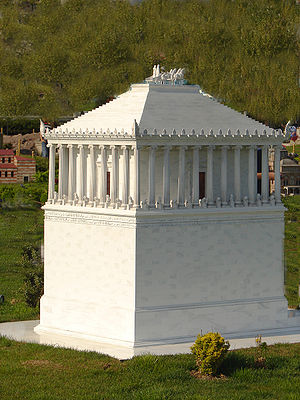 Model of the mausoleum (45 m high)

Curiously, within a stone’s throw of the British Museum is Hawksmoor’s St George’s Bloomsbury (built between 1716 and 1731) well before the museum itself. Its steeple is based on Pliny the Elder’s description of the Mausoleum at Halicarnassus. At the peak is a statue not of King Halicarnassus but King George I in Roman dress. That’s another story.