Home London Blackfriars: where Shakespeare lost against the Puritans
London 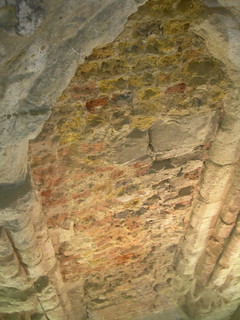 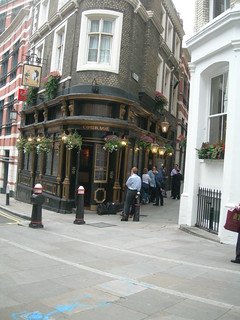 LONDON is often accused of hiding its history but seldom has anything been as well buried as the history of Blackfriars. I walked to work for many years up the deeply uninspiring Farringdon Road without any idea that on the (eastern) side of the street once stood the monastery of the Dominicans or Black Friars from 1276 until the Dissolution in the 1530s when it was divvied up among Henry V111’s cronies. In Henry’s time the former refectory was often used for meetings of Parliament and in  May 1529, the Parliament Chamber – later to become Shakespeare’s indoor theatre – was where the annulment of Henry V111’s first marriage to Catherine of Aragon was debated.

Blackfriars played a seminal role in Shakespeare’s life because when his troupe was forced to leave The Theatre in Shoreditch in 1598, it tried to set up in The Blackfriars precinct only to be thwarted by a group of aristocratic Puritans led by the uber-connected Lady Elizabeth Russell whose single-mindedness makes Mrs Thatcher look like a girl guide. As a fascinating book just published (Chris Laoutaris, Shakespeare and the Countess) argues, it was only because Shakespeare’s troupe – led By Richard Burbage – was thwarted in Blackfriars by Lady Russell and her neighbours that it had to resort to Plan B – to build the Globe over the Thames on Bankside out of timbers recycled from The Theatre. Without Lady Elizabeth’s nimbyism, there may have been no Globe. Anazing thought. 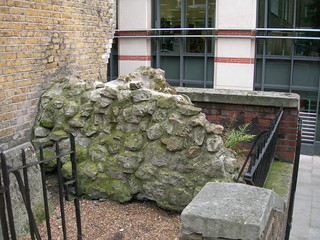 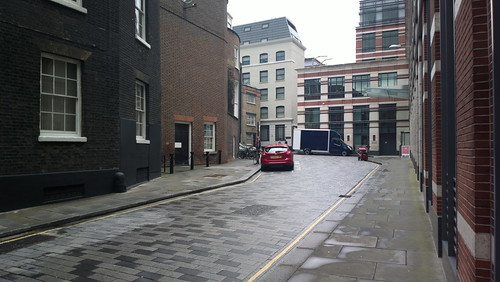 Old wall (left). Playhouse Yard (right). The theatre was near the pillared building at the back

Later on in 1608, after Lady Elizabeth’s death, Shakespeare and his King’s Men were able to occupy, or re-occupy the (much more profitable) Blackfriars site in the Parliament/Refectory hall where they staged Henry V111 (originally called All is True) in the very hall where Henry’s divorce petition against Anne Boleyn had been debated years earlier and using some of the actual words mouthed by Catherine.

All that remains today of the monastery is a lonely section of unmarked wall outside (immediately above, left) and a walled up window inside the office block nearby (top, left). There is nothing to remind visitors that this is the site of the most profitable venture of Shakespeare’s company let alone that at the end of Ireland Lane – roughly where the Cockpit pub is today – was the only property Shakespeare is known to have purchased in London – the gatehouse to the monastery.
In Staunton, Virginia, the Americans have built a full-scale replica of the Blackfriars as a tribute to Shakespeare. An American – Sam Wanamaker – was also responsible for building a replica of the Globe on Bankside. London is greatly in debt to the endeavours of Americans for maintaining interest in these two iconic Shakespearean theatres. Meanwhile, the site of the original Blackfriars theatre remains invisible without even a plaque to acknowledge its existence.
@vickeegan
Tweet
0
TwitterEmail