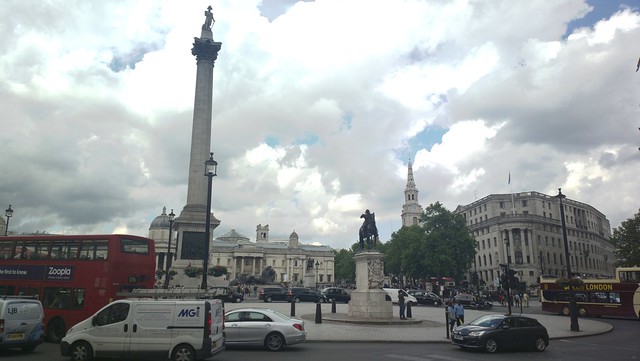 Trafalgar Square today with King Charles l looking down Whitehall towards his place of execution
Nothing is quite what it seems in Trafalgar Square. It is umbilically tied to Nelson’s column in popular imagination but it was not meant to be. It was never intended to have a statue of Nelson there at all. The column was an afterthought when a parliamentary committee imposed Nelson there to the chagrin of the architect Sir Charles Barry who had intended to build the Royal Academy in the middle of the square as a complement to the National Gallery in the north. The name Trafalgar Square was also an after thought. It was originally going to be called “King William lV’s  Square”.
Poor King William. He not only lost his square but his plinth as well. What is now called the Fourth Plinth on the north-west side of the square – these days a permanent home for temporary statues – was originally intended for a bronze statue of William IV but no one could raise the money for it and the plinth remained empty until 1998 when the Royal Society of Arts (RSA) suggested the idea of rotating a series of modern sculptures. They generate praise and scorn in equal measure but have the exhilarating effect of starting conversations in the open air about modern art in the middle of a capital city.
It goes on. The National Gallery itself was never intended to look quite like that. William Wilkins, the Gallery’s architect, was very miffed when he was forced to incorporate columns and capitals from the nearby Carlton House (roughly where the Duke of York’s column now is in the Mall) which had been lying in shortage since its demolition. This gave rise to widespread criticism at the time that the square  lacked grandeur.  Well, you can’t win every battle. 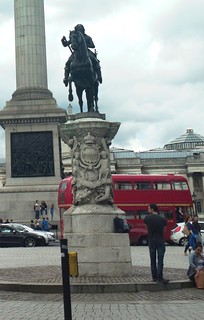 The little noticed bronze statue of George IV on the north-east of the square was never intended to be there either. It was originally planned for the top of the Marble Arch – at a time when the arch itself was going to be outside Buckingham Palace – but he was plonked on this plinth as a temporary resting place and has been there ever since.
Another statue that has gone walk-about is General Gordon. There used to be an 18ft high (pedestal) statue of him in the square between the two fountains before it was removed in 1943 and re-sited on the Victoria Embankment  a decade later. And the fountains themselves are not the original ones which were erected there to prevent large numbers of potential rioters assembling together. They were given as a present to Canada and replaced by new ones designed by Sir Edwin Lutyens in 1937-39. Another statue – of the discoverer of vaccination, Edward Jenner – which once  stood in the south-west part of the square next to Sir Charles Napier (who was still there at the time of writing) was shipped off to Kensington Gardens in 1862. The shortest journey was made by the earth excavated from the square. It was taken to nearby St James Park to level the land.

If Trafalgar Square is beginning to look like a game of musical statues we may be tempted to look for continuity at the statue of the executed Charles I (below) situated at the southern end of the square looking down Whitehall to his place of execution outside Inigo Jones’ Banqueting Hall. It is the oldest equestrian statue in London, created by a French sculptor Hubert La Sueur in 1633 and is still there. Except that it hasn’t always been still there. It was ordered to be melted down by Cromwell’s Parliament after the Civil War. For its present presence we have to thank the brazier who, instead of melting it down, hid it and sold it back to Charles II after the restoration of the monarchy where it has remained ever since The statue was erected on the site of the original Charing Cross, created by Edward l in the early 1290s as a memorial to his wife Eleanor. It can be regarded as the centre of London as distances from the centre of the capital are measured from a point underneath the statue.

A royal presence is fitting because Trafalgar Square is actually owned by the Queen though the roads around it are controlled by Westminster Council. The square is now a revered place, especially since the northern end has been pedestrianised transforming it overnight into a bubbling public space for gossiping and entertainments of all kinds from Opera to food markets and celebrations of the Chinese New Year.
There may be a moral to this. Maybe we should rotate all our statues on a regular basis so new ones can replace the giants of old who have long-since faded from the popular imagination.

Follow me on Twitter @vickeegan. Apologies to those who in recent months have signed for updates and not received them. This is a glitch we are working to resolve.