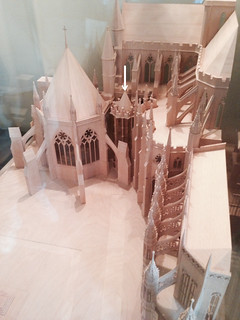 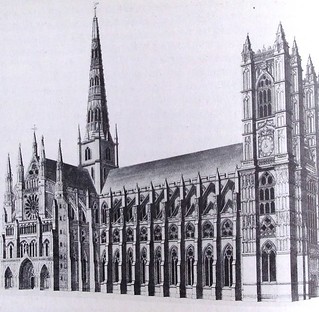 The interior of Westminster Abbey is huge and sublime. But we only see part of it as the very spacious Upper Gallery or Triforium  – some seven storeys high – has been closed off. But not for much longer. The Abbey is about to apply to Westminster Council to build new stairs and lifts between Poets’ Corner and the Chapter House to enable public access which is only possible at present by way of a small spiral staircase.
The model for the new access, which members of the Thorney Island Society had a preview of yesterday  (see arrow, above left) shows how the Ptolemy Dean – an architect with a name even more historic than the Abbey – has tried to overcome the difficult task of harmonising the style with the rest of the Abbey. In common with many other medieval buildings it will be clad in lead rather than stone which is too bulky for the constrained space.
The Triforium, which boasts spectacular views of the inside of the Abbey, will be used as exhibition space for the numerous treasures that the Abbey is custodian of. If planning permission is granted it could be open to the public by 2017. But this doesn’t mean that building work on the present church, (technically it is not an abbey) completed by Edward the Confessor in 1160 on the site of an earlier church, will be finished. The first stage was an education centre and delightful cellarium, where I often have an afternoon coffee, while the third stage will be construction of a spire (above, right) as conceived by Sir Christopher Wren over three hundred years old. Since the original foundations were planned conservatively to support a spire there is apparently no need for further re-inforcement. All that is now needed is someone with pockets as deep as the spire is high.