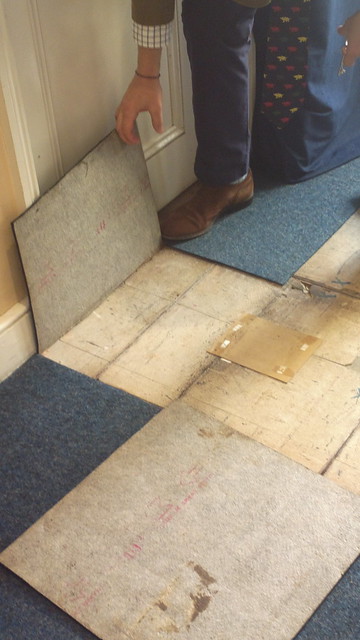 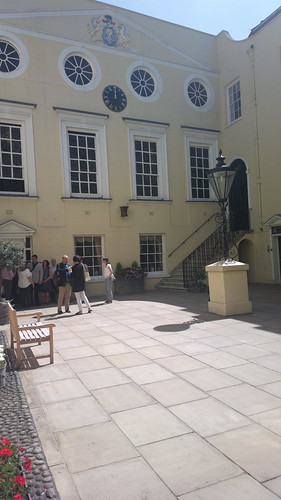 It is not often that we London bloggers stumble across something that stops us in our tracks – but it happened yesterday. Twice. The first time was during a delightful tour of the venerable Apothecaries Hall in Blackfriars whose alumni include John Keats, Agatha Christie and Elizabeth Garrett Anderson, the first woman to blast her way – and it needed some blasting – into qualifying as a doctor. The tour itself, organised by London Historians, was memorable. Apothecaries are the largest City livery society (indeed, the only one as the others which dirty their fingers in trade are mere companies) and has a dizzy array of panelled halls and rooms replete with portraits of its illustrious leaders (see, below). Well worth a visit on the few days it is open to the public.

But the Hall is also of interest because it sits on the site of the medieval Blackfriars Monastery where Parliament once sat and where Catherine of Aragon defended herself when Henry VIII divorced her for Anne Boleyn.  William Langland in the ancient poem, Piers Plowman, railed against the loucheness of the monks, but that’s another story. After the dissolution of the monasteries in the 1530s Blackfriars became a posh residential area and the site of two theatres, the first of which used some of the space now occupied by the Apothecaries Hall and the second was Shakespeare’s indoor theatre which was immediately south of what is now the hall.

Hardly anything of the monastery now remains apart from a tiny section of wall  and part of another wall lost inside a nearby office block  which very few people have seen. So, imagine our surprise when we asked our admirable guide, the Beagle, Gary Howe, whether there were any traces of the old monastery  left. At first he seemed to say No but then added that comparatively recently they had found a crypt-like arched room 20 metres long after lifting some carpet tiles and descending down a narrow opening. They didn’t take any photographs so this hidden gem – for once the term is correctly used – still remains hidden. He was kind enough to lift the carpet tiles, tantalisingly,  for us (above, left) which are immediately in front as you walk in the main door and the remains of the monastery would run roughly beneath the front of the building (above, right), where some London Historians are standing).

If that wasn’t enough for one day we took a visitor from New York around the corner through Playhouse Yard and along Ireland Lane to show her the Cockpit Pub on the site of the only property Shakespeare is know for certain to have purchased . But when we got there we bumped into the Chambers director of the building opposite who not only claims that it is the  true site of the gatehouse but points to a new plaque on the wall, approved by the Corporation of London, which has endorsed it. I will need more evidence before I take sides in this Shakespearean turf war – and in any case there is a limit to the number of surprises you can take in a single day. 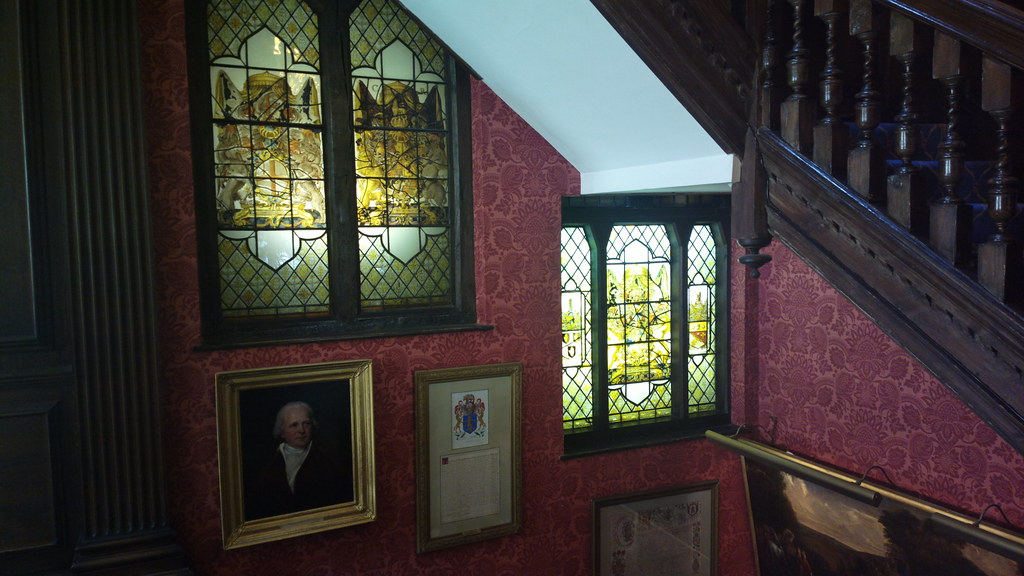 Medieval stained glass, (above) and dining hall, below) 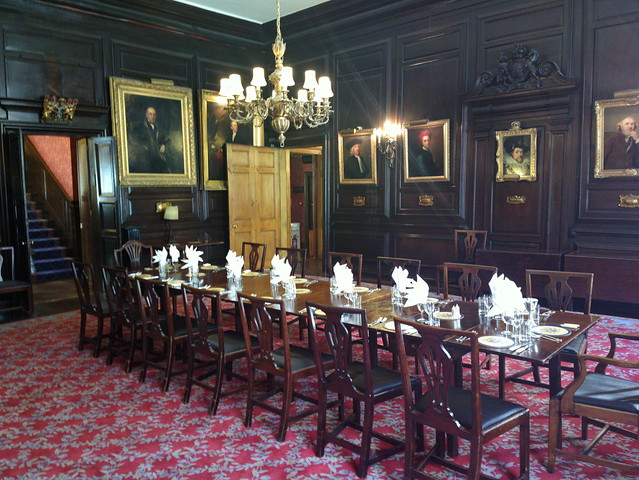