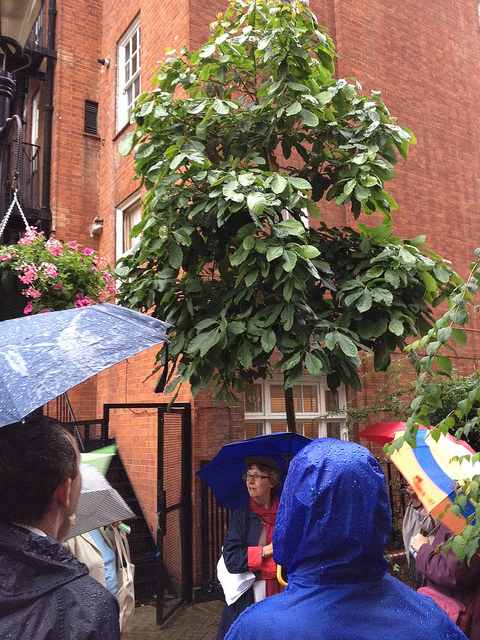 THE saying the nearer you are to something, the less likely you are to know about it came home to roost during a rain-soaked tree walk around my native Victoria (that’s SW1 not Australia) organised by the venerable Thorney Island Society. Thorney was the small island on which Westminster Abbey stood in olden days – though technically it isn’t an abbey at all but the Collegiate Church of St Peter at Westminster.
Highlight of the tour was two avocado trees (see photo) in Page Street barely two blocks from where I live which I have often passed by without even noticing them. They were apparently planted from seed by residents of  Schomberg House in a broad alleyway which may have acted as a micro climate. Our expert guide from Westminster council said that the avocado, native to central Mexico, belongs to the same family as bay and cinnamon. Also in Page Street is a white mulberry tree, (loved by silkworms) and olive trees (Olea Europaea) which are now used as street trees in parts of Westminster. Around the corner in Regency Street there are some Dawn Redwoods which were thought to be extinct until 1944 and only described from fossils. In Vincent Square there is a north American sweet gum tree and a pendulous Judas tree not to mention nearby a number of Ginkgo Bilobas, the oldest tree known to man that predates the  dinosaurs. Elsewhere we saw Russian vines climbing rampantly up a Home Office wall (relax, it is all planned), hornbeams, himalayan birches and others. Victoria has been a place of many attractions but being an arboretum was not one of them. Until now.