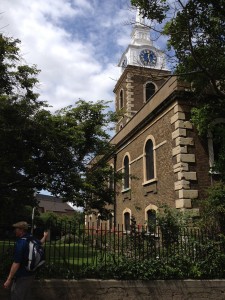 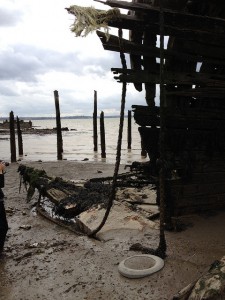 Gravesend, less than 25 minutes from St Pancras on the new fast train, provides a perfect start for a marvellous stroll along the Thames estuary, one of the least visited parts of the metropolis. You soon find out why if you walk down the hill towards the Thames. After the surprise  – to me – of passing the church where Pocahontas is buried (above, left) you soon get into wild territory. Pocahontas (in the un-Disneyfied version) was the daughter of an indian chief who reputedly saved the life of settler John Smith in 1607 by placing her head on the block before her father could execute him. She later married a tobacco planter John Rolfe and died in Gravesend of a mysterious illness on her way back to America after a triumphal visit to England.
Turning right and following the coastline we (@geoplace @aleksk and team leader @moongolfer) soon entered a series of alleyways best not traveled alone behind derelict factories littered with “found art” like the motor car tyres  and huge discarded anchors complete with chains. We arrived for lunch at the delightfully decadent Ship and Lobster, the last (or first) pub along the Thames and by local tradition the “Ship” tavern mentioned in Dickens’ Great Expectations. There is no inn sign on the Thames side  and on the front (or is it the back?) the letters have been falling off to be replaced by daubs of paint (and, no, don’t ask for lobster).
Soon the landscape opens out to miles of beautiful levied river bank with not  a soul in sight – apart  from the security man sussing us out for snapping the Metropolitan Police’s vast training town – complete with streets, railway coaches and a Barclays bank where they prepare for counter-terrorism and other activities. After a truly bracing walk past deserted forts that once protected London from invasion we came to a graveyard of ships abandoned by the their owners (above, right) to rot but stunning enough to win a Turner prize on merit. We turned inland and managed to get to the churchyard seen by Dickens as the place where Pip encountered Magwitch before rain stopped play after a brilliant day but before we could get to Gad’s Hill where Dickens lived in his later years and where Falstaff and the young Henry V went on their thieving expeditions. Another day, another walk.