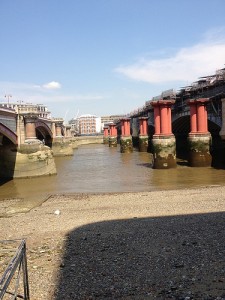 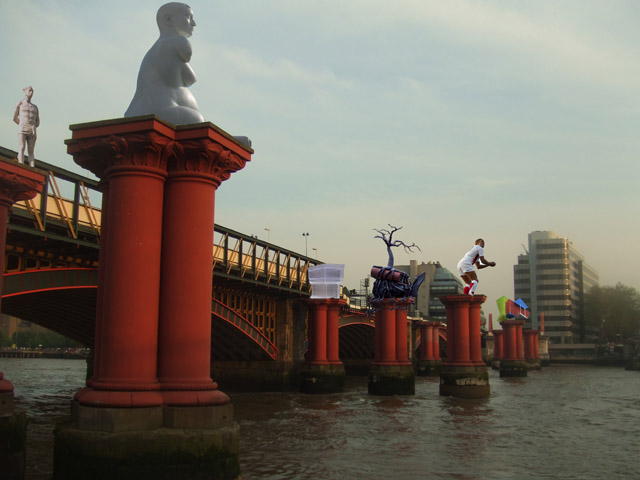 Anyone looking for a post-Olympics project should look no farther than Blackfriars Bridge. Not the newly renovated railway bridge. Not the road bridge – but the one in between. It used to carry the Chatham and Dover Railway and a stone plinth on the southern side – proclaiming “London and Chatham Railway,1864” – steers us towards where the original station stood on the present site of the Daily Express building. The brick building to the south of the building is the entrance to the old station.
But that was then. Today we are staring at these magnificent piers stretching across the Thames with nothing to do. It  is the most conspicuous bit of unused real estate in the centre of town. They were utilised by builders during the extension of the current Blackfriars station but are now back to their original state, a structure looking for a good idea.
What should be done? Many years ago there were moves to put an art gallery there but they came to nothing. What about a museum of the Thames embracing a restaurant with a glass floor? The museum could include memories of Paris Garden, the area immediately south of Blackfriars Bridge once home to the biggest Elizabethan theatre, The Swan which could hold 3,000 people (more than any West End Theatre today) and its most notorious brothel, Holland’s Leaguer. This was a mansion with a drawbridge that had originally been part of the estate known as the Liberty of Paris Gardens. catering to playgoers at the Globe, Swan and Rose as well as punters  coming from the other side of the Thames across London Bridge or bring rowed in “wherries”. There is not so much as a plaque to commemorate these historic buildings. Another option would be to turn the piers  into a massive piece of public art with an international competition.
Matt Brown of the Londonist website has made the excellent – and inexpensive – suggestion that they could host the sculptures on the fourth plinth in Trafalgar Square once time has been called on them. He has produced the graphic (above) showing what it might look at. This could be an excellent interim solution while Boris is making up his mind. Anyone else with ideas?

The phantoms of St Pancras