The phantoms of St Pancras

When most people hear the words St Pancras they think of a spanking new railway station. I think of old St Pancras church  – and dead bodies with lives of their own. It really is old – a notice board as you enter tells you it has been a site for meditation and prayer since 314 AD, making it one of the oldest churches in Christendom.
It was here  in the churchyard that Mary Godwin, creator of Frankenstein, met her lover and husband to be poet Percy Bysshe Shelley at the grave of her mother Mary Wollstonecraft, the author and advocate of women’s rights; it was where Dickens had dead bodies stolen for gain (in a Tale of Two Cities) and, most famously, where where the roots of the “Thomas Hardy Tree” (below, left) seem to be clutching the gravestones of long dead people to its bosom, unwilling to let go. Hardy was an assistant architect in charge of clearing dead bodies from part of the churchyard in the late 1880s to make way for an expansion of the Midland Railway. His experiences in this churchyard may have nurtured his love of churches and his almost obsessive interest in “hauntings”.
In the photograph above, the grave of Mary Wollstonecraft (1759-1798) is on the left (1) next to a plane tree while in the background is St Pancras Coroner’s court (2) where in 1942 the coroner Bentley Purchase in top secret conditions authorised the use of one of the corpses in his care which was given a new identity and allowed to float ashore on a Spanish shore with fake documents in its pocket indicating that the allied landing against Germany would be off the Greek coast and not as was planned in Sicily. The ruse worked, accelerating the end of the War and was later made into a film. “The Man Who Never Was”.

In the foreground (3) is one of only two Grade 1 gravestones in London (the other being someone called Marx in Highgate cemetery). If the shape looks familiar, it is because it is. It is the resting place of  its own architect (Sir John Soane) and his wife. The shape of the stonework of the mausoleum acted as an inspiration for Sir Giles Gilbert Scott when he designed the first telephone kiosk. Look and you will see why. At the rate telephone boxes are closing around the country in the wake of the mobile phone revolution it may not be long before the stonework that inspired it becomes a mausoleum for the kiosk itself. 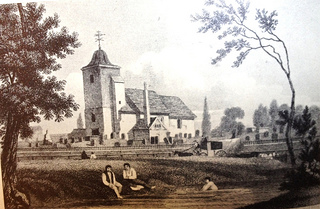 The church was named after a Catholic martyr aged 14 who was beheaded for his beliefs by the Roman Emperor Diocletian. It was rebuilt several times before assuming its present Victorianised style shortly before 1850 but still retains old features including walls and a 6th century altar stone. It was once a Roman camp said to have been visited by Julius Caesar. These days, despite spacious grounds, it is sandwiched between the main road (running between St Pancras Station and the British Library) on one side and the mainline railway out of St Pancras station on the other. It was not always so and it is not difficult to imagine the church in open country with the Fleet river running snugly at the bottom of the hillock (see, right). It still does, but like all of the other tributaries of the Thames, it is buried underground to bedcome a kind of phantom river running by an eerie church.

Damien does the Lambeth walk