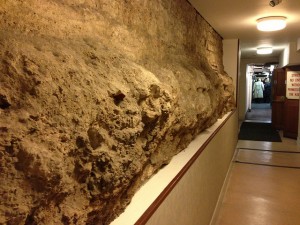 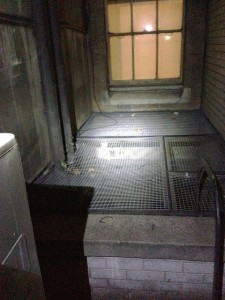 Not a moment easily to forget. There I was last night  standing in the dock in Court Number 1 at the Old Bailey where Dr Crippen, John Reginald Haliday Christie and countless other murderers had been sentenced to be executed. On this occasion I was not on trial but part of a group organised by @LondonHistorian en route to the rarely seen subterranean depths of the Bailey from which many prisoners in the past never returned. As we went down I was delighted to pass by part of the ancient London Wall which has been preserved (above left) as part of the building. Further up Newgate Street 20 feet beneath the Merill Lynch building there is a much bigger part of the wall which once stretched in a horseshoe shape from Blackfriars to the Tower of London. Soon after leaving this section of the wall we entered a long corridor known as Dead Man’s Walk where prisoners about to be hanged walked through doors of ever decreasing size – as if to remind the condemned of the shortening of their lives – until they reached the grill (above right) which used to house a birdcage-like contraption which took them to the hangman.
The Old Bailey is built on the site of the medieval Newgate prison whose alumnni include Daniel Defoe, John Milton, Oscar Wilde and Jack Sheppard, the inspiration for Macheath in John Gay’s Beggars’ Opera. Many of the stones of Newgate were recycled in the new building. An underground tunnel linking the Bailey with St Sepulchre’s church opposite was built so priests could administer to the prisoners without having to weave theur way through thousands of ghoulish spectators awaiting an execution. Sadly, several of our members cast doubt on whether the vaults of the atmospheric Viaduct tavern opposite (formerly a gin palace) actually contained cells from the old Newgate prison as is often mooted.
Earlier we were treated to a delightful history of the Old Bailey by its managing director or Under Sheriff, Charles Henty. Among the numerous facts learned was that over 2,000 people pass through the Bailey each day and no prisoners stay overnight. The statue of Justice on the pinnacle of the building weighs over 20 tons and, contrary to popular belief, is not blindfolded. One of his favourite cases was when William Penn (the Quaker founder of Pennsylvania and drafter of an early version of the US constitution) was acquitted in 1670 by the jury of unlawful assembly only for the judge to order the jury to return a guilty verdict which they refused to do and were promptly imprisoned by the judge who also happpened to be Lord Mayor. However, the Chief Justice overturned this verdict thereby enshrining in law the jury’s right to judge by its own convictions – which has happened at the Bailey ever since.