Home London Behind the door of 575 Wandsworth Road . . .
London 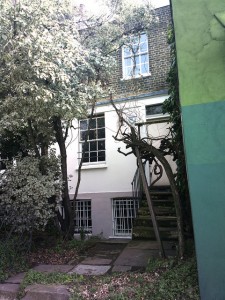 Hardly anyone passing by 575 Wandsworth Road gives it a second glance. Which is probably how Khadambi Asalache would have liked it. He was a private person without a hint of showmanship in his genes.  But behind these walls after he retired from working at the Treasury he laboured up to ten hours a day turning it into his own private paradise of Moorish fretwork patterns often carved from wood rescued from skips. The National Trust was so taken by it after he left it to them in his will that it has spent £500,000 restoring the superstructure of the house as a work of art keeping intact all of his fret-filled musings right down to pencil marks on the ceiling. His partner Susie Thompson, a Scottish basket maker, told us he was not consciously creating a work of art but just “walked his own way” .
A polymath, Khadambi was born in western Kenya in 1935 and is said to have read Shakespeare while herding cattle. He studied architecture at what later became the University of Nairobi, fine art in Rome and Vienna and was awarded an MPhil in the philosophy of mathematics from Birkbeck College in London.  He was an acclaimed poet and his first novel,  The Calabash of Life (1967), about Kenyan tribesmen opposing a usurper became an international success
Many artists have had galleries erected as memorials. Few have built their own around them. One can picture Khadambi taking his favoured 77A bus from Whitehall to 575 Wandsworth Road where, like Dr Who entering the Tardis, he emerged into his private fantasy of fretwork which the National Trust has now happily preserved for posterity.
You need to book at 0844 249 1895 as the house can only accommodate 6 visitors at a time (£6 if not a NT member). 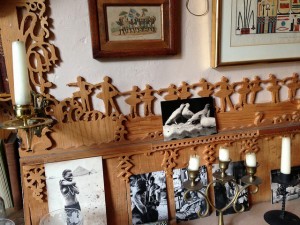