Home London The rise and fall of the Crystal Palace
London 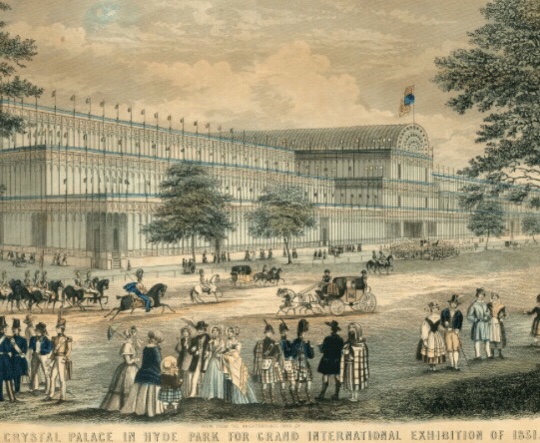 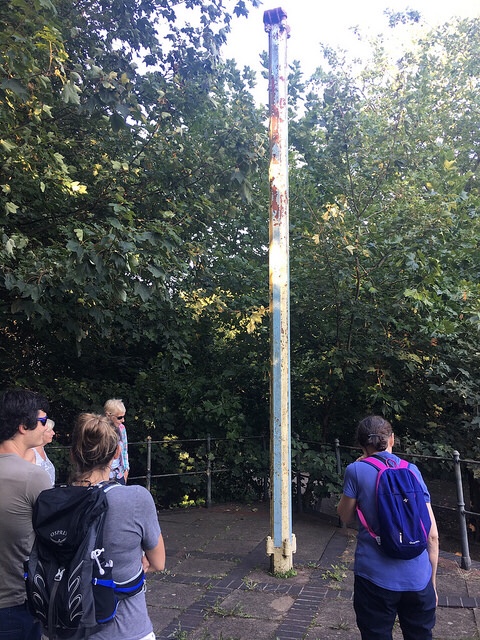 The original Crystal Palace – built in Hyde Park in six months to house the Great Exhibition of 1851 – was the biggest glass building in the world and quite possibly the biggest building of any kind. It was a roaring success visited by 6 million people and made pots of money during its intentionally short life of six months.

But that wasn’t the end of the story. Thanks to the entrepreneurial endeavour of Leo Schuster and others it was transported to a new site at Sydenham in south London and enlarged to a size over 50% larger than the original by its formidable architect Sir Joseph Paxton. It was intended to propogate the history of art, sculpture and architecture. This is part of what it looked like inside https://tinyurl.com/ybv7y5z2 and, unlike the original in Hyde Park, which has completely vanished, some of the surrounding infrastructure of its Sydenham reincarnation can still be seen including the sole remaining stanchion from the glass and iron structure (photo above).

If you look at the remains from the parkland in front of the site it is difficult to believe that despite all the vast terracing and statues which fill your vision you can’t actually see the site of the former Crystal Palace itself which is hiding behind a row of trees waiting for a loose pocketed billionaire to rebuild a modern equivalent.

Even so, there are plenty of reminders from the past including a sawn off base of one of the iron stanchions sticking out from a paving slab, the stub of one of the giant water towers (built by Brunel and used by John Logie Baird to demonstrate his new invention of television), sphinx-like lions still guarding the entrance and huge iron gate posts not to mention the custom built railway station which is still in daily use. 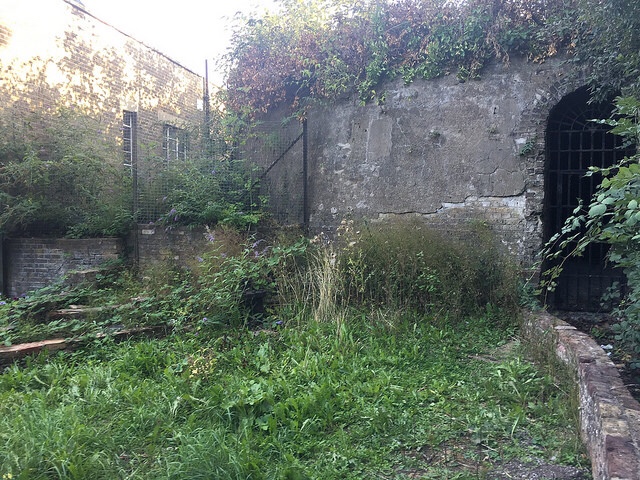 Remains of the pump house

And, of course, the dinosaurs. Although some are in need of care and attention they still stand sentinel on their own island, each of them Grade 1 listed surely making it the densest concentration of such top listed buildings anywhere.

But pride of place must go to that stanchion, the only surviving remnant of the building itself. No-one knows whether it was from Hyde Park or Sydenham as they were all made to a set formula with no identifying marks – but there is a better than 50% chance they are the solitary reminder of the mind boggling success of the 1851 Exhibition.

Six million people visited it and it marked the first time, thanks to the railways, that working people from all over the country mixed with the toffs without the social disruption that some had predicted. It made so much money that it helped finance the cultural hub of the museums in South Kensington and the company behind it still makes millions in profits today for creative causes. There has never been anything like it since. 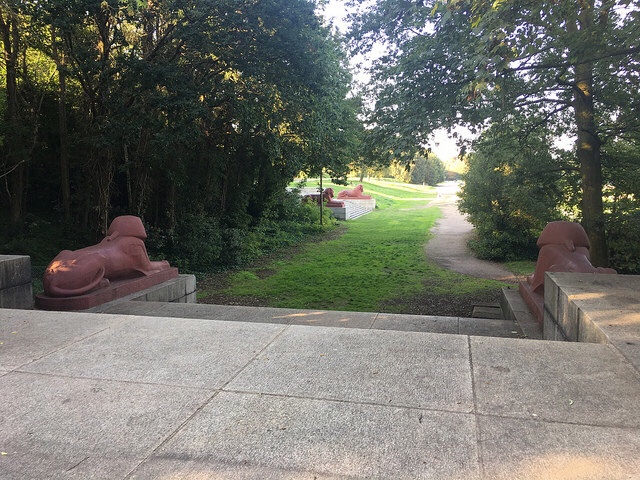 Lion’s eye view of the parkland

Sadly, the replacement at Sydenham was not so successful. Although at its peak it could attract half a million people in a single day there was no way that a vast attraction so far from central London could survive in those days. But its demise came not from financial difficulties but from a devastating 1936 fire which turned into an inferno destroying the entire building (which had a lot of wood in it) though the site still lives on in hope of being restored by a person or persons unknown.

Curious fact – although the Crystal Palace marked the zenith of British industrial pride it was to two Germans that it owed much of its existence. The idea was the brainchild of Prince Albert, Queen Victoria’s German husband, and the transplanting to Sydenham was thanks to a consortium of eight men of whom the leading light was another German Leo Schuster. Oh, and labour had to be brought in from France to make sure the 900,000 square feet of glass was installed in time. A very British success story.

Much of this was inspired by one of ianbull@btinternet.com‘s fascinating walks across little trampled parts of London. Highly recommended

I also written a piece for OnLondon.co.uk on the traces of the 1851 exhibition that still exist http://www.onlondon.co.uk/vic-keegans-lost-london-55-traces-of-the-great-exhibiton/