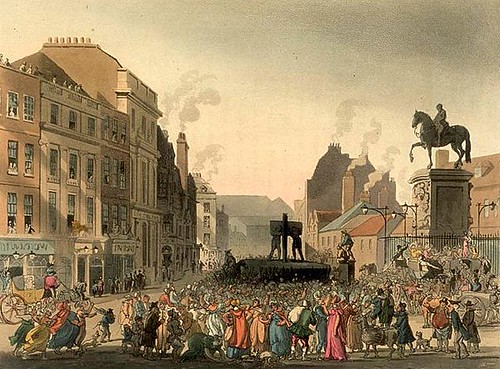 Is there any other part of London that packs so much history into so small a space? The few square metres on which the statue of Charles 1 stands in Trafalgar Square is chiefly known today as the central point of London from which all distances are measured. It is also the oldest surviving reminder of Jacobean London in the square and sits exactly on the site of the much earlier Eleanor’s Cross which dates back to 1294 when Charing was a village midway between the City of London and Whitehall.The statue itself has not always been there. It was commissioned by Richard Weston, later first Earl of Portland, in the early 1630s.  The plinth was made with Portland stone – geologists have found Jurassic oysters embedded within – and reputedly designed by Christopher Wren with carvings by  the eminent Grinling Gibbons. The statue first stood in the grounds of Weston’s Surrey mansion but after the execution of Charles 1, Parliament ordered its destruction. 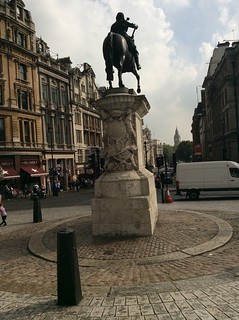 Charles looking at his place of execution

Fortunately, the man entrusted with this task, a Holborn brazier aptly named John Rivett, hid it – probably in the crypt of St Paul’s Church, Covent Garden – while the civil war raged. After the Restoration it was rediscovered by Portland ‘s son but Rivett was unwilling to give it up until Parliament confiscated it on behalf of Charles 11 who had it erected at Charing Cross, bizarrely, looking down Whitehall at the Banqueting Hall where his father Charles 1 was executed. The Banqueting Hall and the statue are the only two structures from the period still standing. Charles has been there all the time since then except during the Second World War when he was evacuated to Leighton Buzzard.

The space near the statue was for a long time the site of a pillory (picture above) and also a place of public executions including those of the regicides who had signed Charles 1’s death warrant, most of whom are buried under the churchyard of St Margaret’s next to Westminster Abbey.

Eleanor’s Cross was erected in the early 1290s. It was the original Charing Cross, Charing being the name of a village largely owned by the Abbot of Westminster and mainly inhabited by fishermen and farmers. The cross was the last of 12 large crosses laid down at each of the places where the body of Edward 1’s beloved wife Eleanor rested overnight on its journey from Lincoln where she died to Westminster Abbey. It was part of an extravagant series of bequests that Edward, known as Longshanks because of his height, made in honour of his wife. 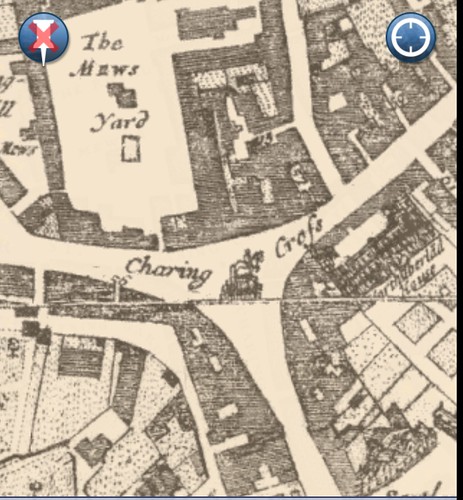 The cross was demolished in 1647 during the civil war and later replaced by the statue of Charles (map, left) but a Victorian copy of what it might have looked like still stands in the forecourt of Charing Cross station where it was placed to boost the attractions of the Charing Cross Hotel. Only three of the original crosses survive, all heavily restored and without their original wooden crosses on top. Some of the statues from the original Waltham Cross were transferred to the Victoria and Albert Museum in London.All of the old village of Charing Cross – the Royal Mews, the village, Northumberland House and Dickens’ Golden Cross tavern – has been demolished. How Charles 1 alone managed to survive all this is hard to fathom. Maybe his ghost has been hovering near.