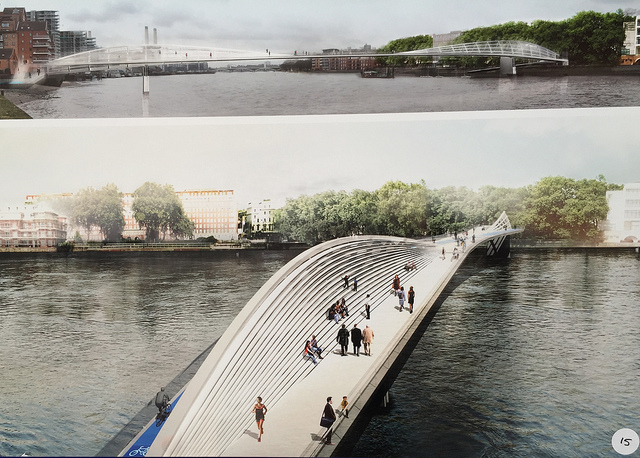 ONE OF THE the stunning recent successes in London has been the construction of footbridges – which fill up with pedestrians as soon as they are finished. Now there are two more in the pipeline. One is the Garden bridge at Temple and the other a pedestrian and cyclists bridge from Pimlico to yuppified Nine Elms in Wandsworth near where the American embassy is being built.
Over 70 fascinating designs from all over the world (see above and below photographed at the exhibition) were on display anonymously today at the Westminster Boating base and can be seen online here.

Most of them sensibly had separate lanes for cyclists but I was particularly impressed with the few that viewed the bridge as a living space not just a plank to convey pedestrians and cyclists across the river. There are some obvious problems not least whether the bridge might be taken over by rough sleepers and others during the night but there is no reason why these problems can’t be overcome. No one closes the embankment because some people might be sleeping rough on it. A bridge like this should be seen as an extension of the living spaces on both sides of the river. 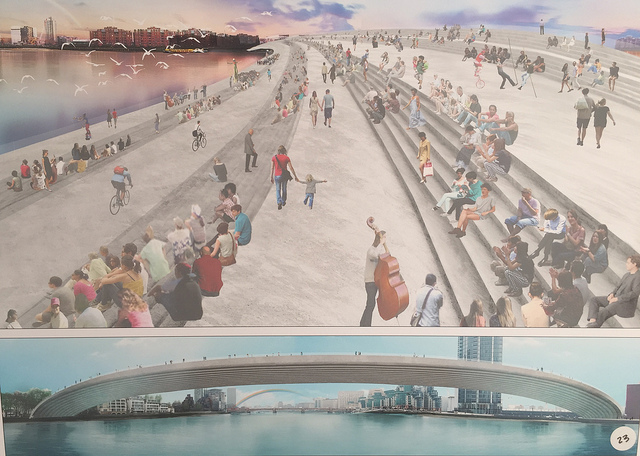 There is a problem. Unlike the Millennium Bridge, the Hungerford bridges and the proposed Garden Bridge, the PoW link (Pimlico over Wandsworth) isn’t leading to a vibrant entertainment centre – it just goes from one old established residential area (Pimlico) to a new one (Nine Elms). It is not even going to divert cyclists from nearby Vauxhall Bridge unless they were already planning to go west along the northern embankment.
This is not an argument against the bridge, just to say that supply won’t necessarily create its own demand on the scale it did on the south bank – unless a redeveloped Battersea Power station becomes a major tourist attraction. But it will link up two London communities hitherto separated by the river and may also trigger economic re-generation on both sides of the Thames. And, hell, it adds to the fun of being in London.
(The exhibition was on the north bank today and moves to the south bank on Feb 27 and Feb 28 at the Rose Centre, Ascalon Street SW8 4DJ)
@vickeegan

Four gems of Lambeth – and a fifth to come