Four gems of Lambeth – and a fifth to come 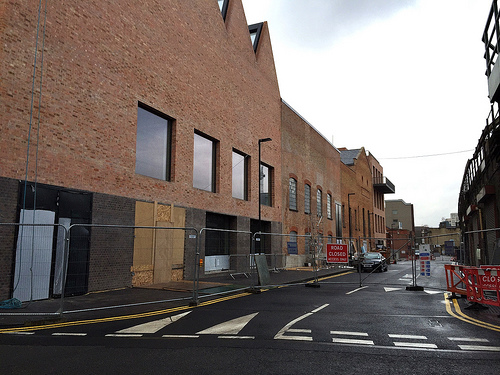 (Damien Hirst’s Gallery)
THE OLD PART of Lambeth, just south of Lambeth Bridge, still has a claim to be one of the few undiscovered parts of central London. But not for much longer. Damien Hirst’s new gallery is nearing completion in Newport Street and is likely to attract crowds of newcomers to this neglected part of the capital. I have mixed feelings about the new influx because four of my favourite cafes in the whole of London are situated within a short walking distance of each other and I’m not sure I want to be crowded out of them. The Garden Museum Cafe is next door to Lambeth Palace in the deconsecrated Saint Mary’s Church, which could be forgiven for buckling under the weight if its own history. It is a delightful place for a classy vegetarian lunch especially when it is warm enough to eat outside and savour views of the knot garden, banana trees and the graves of Captain Bligh of Mutiny on the Bounty and the Tradescant family of pioneering gardeners. It is too modest to advertise the fact that it was declared one of the top ten museum cafes in the world a couple of years ago by an American gourmet magazine. The people buried there including six and a bit (don’t ask!) archbishops of Canterbury, deserve a book on their own. 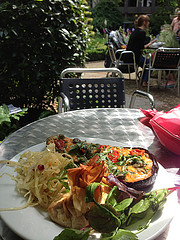 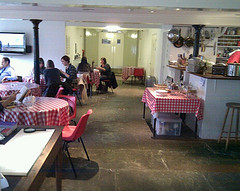 A few hundred yards away through a small park off Lambeth High street is the Beconsfield Cafe/Art Gallery in Newport Street (Thursday to Saturday). It is housed in a converted Victorian ragged school with Damien Hirst’s gallery within sight at the other end of the street . Here you can eat very good vegetarian food in an engagingly intimate atmosphere with good wi-fi thrown in. If the street door isn’t open you will have to press a bell – a bit like trying to get into a Chicago speakeasy.
At the end of Vauxhall Walk Is the Tea House Theatre, in a lovingly converted former strip pub on the edge of historic Vauxhall Gardens. It is an excellent place for a meal or tea and sometimes a show as well. On the other side of Vauxhall Station along the Wandsworth Road is Brunswick House Cafe, festooned with architectural artefacts, and none the worse for having become rather fashionable lately.
Old Lambeth, once dominated – and polluted – by Doulton’s immensely successful pottery factory, is still host to the company’s attractively tiled head office, a stone’s throw from the embankment road. Definitely worth a short detour. Costa Coffee, the British company which started in the Vauxhall Bridge Road and is now the second biggest coffee company in the world after Starbucks, has its roastery here. All is now changing as luxury apartment blocks spring up all over the place doubtless bringing in their wake new restaurants and amenities. Setting the pace is the new gallery, head office and cafe complex being built by Damien Hirst to house among other things lots of the paintings and sculptures he has acquired over the years. Artistic projects like this usually stimulate the local economy. This part of Lambeth will never be the same again.

The curious voyage of Cleopatra’s Needle