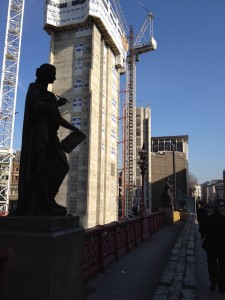 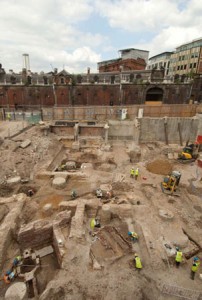 One of the unfathomable mysteries of London is deciding what is the oldest pub. It will probably never be solved because it depends on what you mean by “old”. Does an old tavern built on the same site as an older one count more than a brand new one built on an even more ancient tavern or coffee house (which probably also sold gin)? And what about the Three Tuns at 60 Holborn Viaduct, a marvelous medieval/Tudor tavern recently excavated by that intrepid team at the Museum of London? It is a very impressive find with walls over 2.5 metres high – see above, left – that will now be buried under yet another office block (above, right). Why couldn’t they have restored it and got the developers to leave a space for it as happened with the Rose Theatre on Bankside?
The pub, complete with its own brewery, spanned both sides of Snow Hill which was then one of the main thoroughfares in and out of London – and also the route condemned prisoners took from nearby Newgate Prison to Tyburn where they were hanged. You can read more from the Museum of London here.

There were many pubs in London called Three Tuns and they appear often in contemporary poetry. Richard Ames, who wrote an epic London poem called “A Farther Search after Claret” (1691) – which sent him scouring every tavern to find a decent glass – may have had the Holborn Three Tuns in mind here as it was close to Newgate and the Fleet debtors prison.

To the Sign of Three Tuns in the Heart of the Rules,
Where the Debtors esteem all their Creditors Fools;
We found Mr. Ro*e who was cutting a Caper ,
For joy that he newly had paid Debts by Paper;
So lively and brisk was the Quondam Old Taylor ,
In thinking he now might walk free from a Jaylor ,
That excesses of Joy did of Sense so bereave him,
We thought that in prudence ’twas fittest to leave him.

This is probably another reference as both the Castle and the Three Tuns were situated in Snow Hill:
To no Tavern in Wood-street my Friend would be led,
Not to Castle, Three Tuns, nor to Jolly Bull head ,
Tho he feard no Arrest, yet for Reasons best known
To himself, he resolv’d for to enter in none.