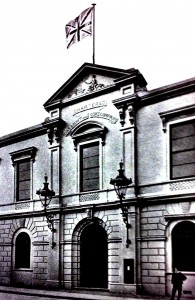 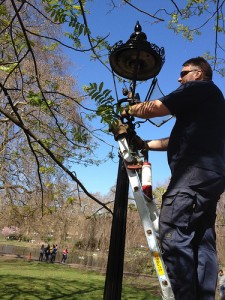 Seen in St James’ Park (above, right) – a man servicing a gas light, one of a series that still reaches out from the park to The Mall and Pall Mall where the first working gas lamp was installed by Friedrich Albert Winsor (bornWinzer), a German entrepreneur living in London. Building on an earlier invention by William Murdoch- who used coal gas to light his house in Redruth, Cornwall – Winsor founded The Gas, Light and Coke Company in Horseferry Road, Westminster, SW1 in 1812 (above, left). It is the grandfather of today’s British Gas and marked the world’s first public supply of gas. The lamps in St James’s Park and some surrounding areas are still lit with gas from the mains and the only major change since their inception is that the timing mechanism for lighting them up works by clockwork instead of being lit by hand as happened until the 1914-18 War . They have to be re-wound every two weeks.