Home London This is where Spitalfields buried its dead
London 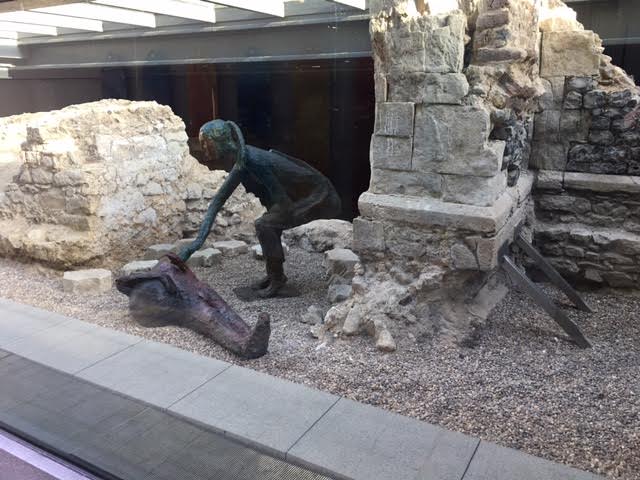 THE HISTORIC Charnel House in Spitalfields has been much written about by enthusiasts but rarely seen – even by people who live and work in the area. I gave up asking people where it was yesterday and, rather ironically, had to rely on SatNav to find the only medieval remains in Spitalfields, indeed in the whole of Tower Hamlets.
The reason passers-by – including yours truly in times past – miss it is that has been beautifully and cunningly preserved. There is a glass floor at street level which you wouldn’t notice unless you knew you could observe the remains underneath. To see properly you must go down stone steps and peer through glass at the bulk of the remains including a recent dark sculpture to add an extra touch of the macabre. It is a bit like looking into a medieval aquarium.
The Charnel House was at the perimeter of the very large ancient Priory of St Mary Spital (short for hospital) where they kept the bones – mainly heads and legs – of the deceased so prayers could be said for the repose of their souls. It dates from the early 1300s though the hospital – which derives from the word “hospitality” – was founded in 1197 on the site of what is believed to be a much earlier Roman cemetery.
At a time when the people of Spitalfields are resolutely fighting for the preservation of their more recent heritage the Charnel House stands as a fine reminder of how it is possible to preserve the past within the present. It is to be found under the Norman Foster building at 1, Bishops Square.
For a more detailed review with lots of pictures see the Gentle Author at http://tinyurl.com/gsx3bol