Home London The most important room in our history
London 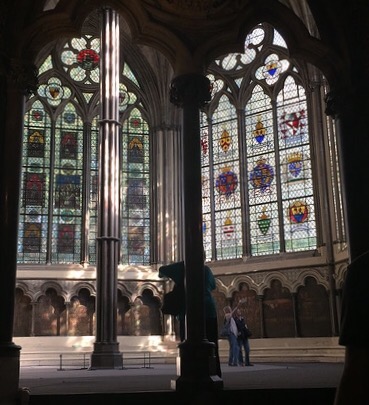 The Chapter House of Westminster Abbey, arguably, is  the most important small building in the country. It is interesting enough in its own right before looking at what happened later. It was built by Henry 111 in the mid 1250s as place where the monks could meet every day to read a “chapter” from the rule of St Benedict before discussing what was to happen during the rest of the day. It was octagonal in shape replacing an earlier round chapter house constructed by Edward the Confessor in 1050 and has been described by Sir Giles Gilbert Scott as “a structure perfect in itself”.
Its sublimity still shines through even though the wall paintings and floor tiles (dating back to the 1250s) have faded and the original stained glass windows were replaced as part of Victorian improvements. The door on the south side before you enter is the oldest in Britain dating back before 1066 to the time of the Confessor. The Chapter House was always part of the Abbey but located a short distance away. This has the advantage today that you can visit it via the cloisters without having to pay the £18+ entrance fee to the Abbey proper (entry via Dean’s Yard).
The chapter house is a thing of beauty in itself but also the birthplace of two great British institutions. In the late 1370s Henry 111 summoned and nobles and gentry from the country to this room to discuss thorny questions such as the raising of taxes which until then had been the sole right of the King. They continued to meet there or in the monks’s refectory as an embryonic House of Commons until 1547 when Edward V1 moved them across the road to St Stephen’s Chapel. As Dean Stanley observed of the Chapter House “almost all the struggles for liberty against the Crown must have taken place within these walls”.

When the Commons moved out the space vacated started to be filled with State records and documents. During the reign of James 1 papers relating to the King’s Bench and the Common Pleas were stored there, a practice that carried on until the end of the 1850s.  During this period they became a treasure trove of artefacts of English history including the Domesday Book. These documents formed the core of the Public Records Office until it morphed into the National Archives at Kew. It is really quite extraordinary that so small a room as the Chapter House has so much history crammed into it. And it is still there.