Stepping back 6,000 years at Vauxhall this morning 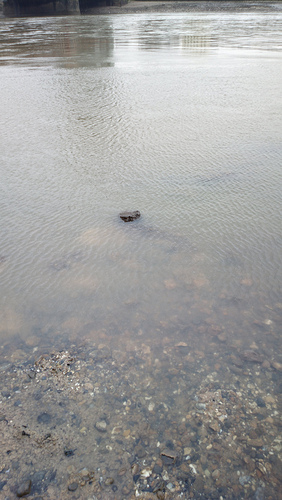 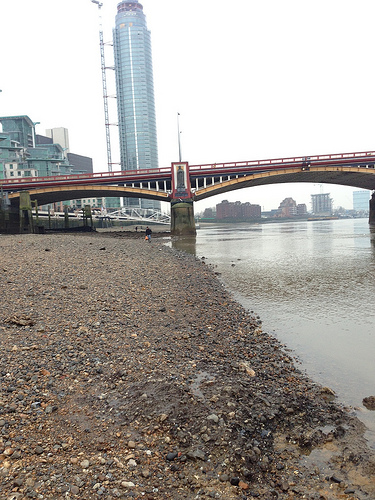 It is not often you get a chance to move 6,000 years back in time in London, and especially not at Vauxhall. It happens once a year at the lowest tide of the  Winter – this morning as it happens. It is around the time when 16 otherwise undistinguished timber posts peep above the recoiling Thames in front of the MI 6 building to give us a glimpse of what this part of London, or rather pre-London,  looked like during the mesolithic (middle stone age) period. At least that’s the theory. But no one told me that, although 10 am this morning marked the lowest tide of the year, the lowest tide was much higher than normal because of the huge amount of rain being carried down the Thames. So we only saw one post (above left) but it was enough to set the time clock ticking to imagine what it must have looked like 6,000 years ago. In the photo on the right you can see in the foreground a pile of prehistoric peat set against the modern background of London’s latest skyscraper block whose crane was hit by a helicopter earlier thus month. I have a feeling the  pile of peat will still be there long after the block is demolished.
Archaeologists believe that the timber posts, found during a foreshore survey almost three years ago but kept secret until last year, formed part of a pre-historic structure near where the river Effra meets the Thames. They are only 600 metres downstream from Bronze age piles discovered in 1993 which are over 3,500 years old.
The mesolithic remains could have been a bridge to a small island on the Thames which in those days was wider and shallower than it is now or it could have been a platform.  No one yet knows for sure. The remains were found by archaeologists from the Thames Discovery Programme in association with English Heritage, the Museum of London and the Geomatics team from Museum of London. There may be more discoveries as they continue their amazing work uncovering bits if London’s history that have been buried for thousands of years. Vauxhall will never be the same again.

The London Bridge that went to America (well, some of it . .)