You may not have noticed but London’s grape harvest has just finished. And I think, unintentionally, I was the last link in the chain yesterday as I delivered my pathetic 2.3 kilograms of grapes from our garden (enough to qualify for one bottle of wine) bang on the deadline of 12pm at the collecting point, Unit 13 on Merton Industrial Estate. This is where Chateau Tooting, the crowd-sourced vineyard, collects a gallimaufry of grapes from gardens and allotments around London and turns them into wine at an established winery. Last year it was Bolney Estate  which did a fantastic job of transmuting these grapes into what turned our to be a very palatable wine. This year they went to the well regarded Halfpenny Green vineyard in Shropshire for processing. 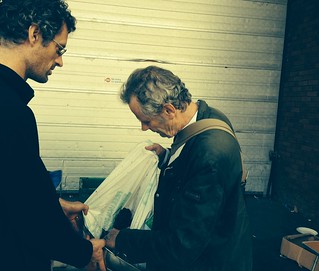 Delivering my 2.3kg on the strike of noon

Chateau Tooting is still London’s largest winemaker but not for much longer. Co-founder Richard Sharp hopes this year to produce more than the 662 bottles recorded last year but soon he will be overtaken by Forty Hall, the admirable community start-up in Enfield, which has a vineyard stretching to ten acres within sight of Canary Wharf and the Shard. (see above) They produced their first bottles earlier this year but there was only a limited quantity which was reserved for volunteers and patrons (such as me). It looks like there will only be a limited quantity next year as well from this year’s harvest (just collected) because they have wisely been doing some savage pruning in order to strengthen the harvest in later years when they plan to produce 10,000 bottles. If you want to help or become a sponsor you can do so here.
Paul Olding makes Olding  Manor on his allotment in Lewisham. His yield is down this year to 60 to 70 bottles but for a good reason. He has fulfilled his bucolic dream by buying an acre and a half of pasture land in east Sussex near the Kent boarder on which to create a proper vineyard. This will take a few years to establish itself and meanwhile he is able to be a bit more choosy about his grapes and experiment a bit with different yeasts.
Alex Smith who grows grapes along a wall in the yard of his factory at Kings Cross (below) lost his entire output to the birds. He said: “I bought netting and covered the vines but the starlings still found a way in” 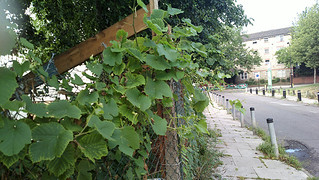 Tony Hibbert, who runs Clocktower vineyard in west London reports that the weather was perfect for grapes and about 6 weeks ahead of last year, so he is hoping for a much higher sugar content. However powdery mildew has destroyed a large proportion of the grapes, but those which survived he is leaving for as long as it takes to reach 12% alcohol without adding sugar.
Marko Bojcun has planted a vineyard called Hawkwood in Chingford to grow for the local community making wine for dozens of households who bring their grapes to him.
All of this is small stuff compared with the resurgence of vineyards in the rest of England and Wales. But from small acorns . . .
Tweet
Canary WharfChateau TootingEnglandForty HallKings CrossLondonOlding ManorShardvineyards
0
TwitterEmail