Musical chairs with the Wellington Arch 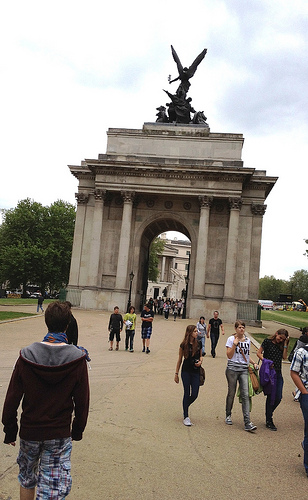 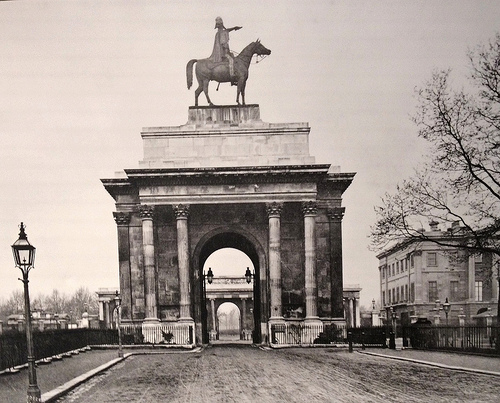 Few people  are “larger than life” like the Duke of Wellington, victor at the Battle of Waterloo,  twice Prime Minister in the 1820s and 1830s nd coiner of the phrase “Publish and be Damned” when a  mistress threatened to spill the beans. But he was also larger than life in a physical sense – and it is all to do with this arch on the traffic island at Hyde Park. It usually prompts the question: “What on earth is it doing here?”
Well, to start with, it wasn’t meant to be here. It was one of two arches commissioned in 1825 to celebrate the victory over Napoleon at Waterloo. The Wellington arch, designed by Decimus Burton, was originally conceived as an outer entrance to Buckingham Palace at the Hyde Park end of Constitution Hill. The other one (now known as Marble Arch and currently situated at the northern end of Park Lane) was originally placed in front of Buckingham Palace itself.
In 1846 the Wellington Arch was used as a base on which a huge statue of the Duke on horse bac was controversially placed which most people – but not the Duke himself  – thought was grotesquely out of proportion  (judge for yourself from the photo above).
The statue was eventually moved after the Duke’s death and was rescued from being melted down (it was built from metal from cannon captured during the Napoleonic Wars) by the army, whose subscriptions had helped to pay for it. It was moved in 1885 to a new site near the garrison church in Aldershot where it still stands.
Later both arches were moved to help traffic flows – the one at the entrance to the palace was moved to Marble Arch and the other, the Wellington Arch, shifted 100 metres to where it now stands at Hyde Park Corner. Both have ended up in the middle of traffic islands, a far cry from the dignified ambitions of their birth.
If you look through the Wellington arch with the Duke himself on top (above) you can see the monumental arch which still stands at the north-east end of Hyde Park Corner (not to be confused with the one at Marble Arch) and through the other you can see the Lanesborough Hotel (formerly St George’s Hospital). All clear now?
London seems fond of playing musical chairs with its monumental arches. The one at Temple Bar in Fleet Street is now embedded outside St Paul’s Cathedral after a journey into the countryside  while the notorious Euston Arch,  once a feature outside the station, is languishing mie away awaiting a recall to its place of origin.

Curtain up on Shakespeare’s Curtain theatre