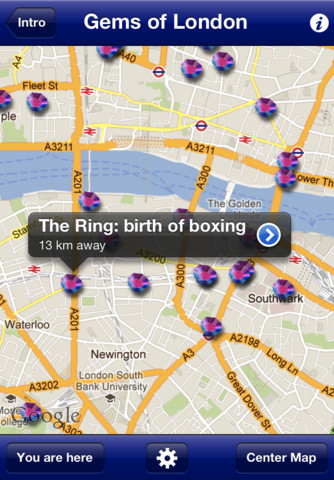 London has some of the best known buildings in the world but there are hundreds of fascinating curiosities that elude the guide books sometimes because they have long since been pulled down.
This app uses the satellite positioning feature on your mobile phone to rummage among the hidden delights of the city whether a cafe sitting astride the remains of a medieval monastery, the pub which gave prisoners a final beer on their way to be executed at Tyburn or the scattered remains of the old London Bridge.

If you are walking the streets of the City or sitting in an armchair in another country let this App be your guide to some of the gems of London that even most Londoners might not know of.